rear suspension rebuild -- is a snazzy panhard bar the only option?

The manual calls it the Rear Axle Tie Rod, but I can't find it on Rock Auto or Oreillys and when I google it by the manual name all I get is tie rod ends for the front.

Can I buy a stock one? Well ok I haven't called a dealership yet, I suppose I can do that.

Basically I am not rock climbing, I'm looking for new bushings but I'm not pressing new ones in.

Is there any reason to go with a snazzy adjustable panhard? It's a daily weekly driver (work from home, y'know) and the occasional gravel road adventure mobile.
Toggle signature
2005 LS 4WD 235K+ miles

I think it's only if you lift it and need to recenter the diff. I don't know if GM still has any, if they ever did. Not something that's replaced a lot. They might have some in the back of a dusty warehouse somewhere.
Toggle signature
Need GMT360/370 Service Manuals? Get them Here!
Need Full Size Truck Service Manuals? Get them Here!
FAQ Threads
'02 TB EXT 4.2L '06 Saab 9-7x 5.3L '07 TB LS 4.2L '11 Caprice PPV 6.0L '08 Avalanche LTZ 6.0L 2021 Sierra Elevation 3.0L Duramax
This site is funded by you! If you have saved some money from help you received, please consider becoming a supporter or donating. All proceeds go to supporting the site. Thank you!

How do you expect a sheepdog to protect the sheep if the farmer and the sheep keep kicking it - me
Reactions: Matt

Mooseman said:
I think it's only if you lift it and need to recenter the diff.
Click to expand...

Or when lowering the same applies. I still have the orginal panhard bar to my 08 Envoy tucked away. I'm currently running the spohn rear kit(rear uppers, lowers and panhard bar). The diff to frame brace seemed to be the only one I came across that really looked in bad shape, which by the way is attached to one point of panhard bar. 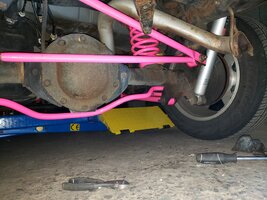 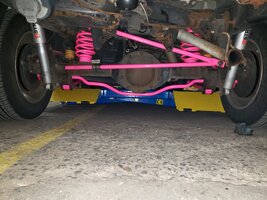 Last edited: Oct 6, 2021
Toggle signature
This site is funded by you! If you have saved some money from help you received, please consider donating or becoming a supporter. All proceeds go to supporting the site. Thank you!
Reactions: Blckshdw, Mooseman, Matt and 1 other person

Rear sway bars are not really required unless you do a lot of slalom racing. Some guys, most notably @HARDTRAILZ , took his out and doesn't miss it. I wouldn't spend that kind of money on one. When one of my links fail, I'll take mine out.
Toggle signature
Need GMT360/370 Service Manuals? Get them Here!
Need Full Size Truck Service Manuals? Get them Here!
FAQ Threads
'02 TB EXT 4.2L '06 Saab 9-7x 5.3L '07 TB LS 4.2L '11 Caprice PPV 6.0L '08 Avalanche LTZ 6.0L 2021 Sierra Elevation 3.0L Duramax
This site is funded by you! If you have saved some money from help you received, please consider becoming a supporter or donating. All proceeds go to supporting the site. Thank you!

How do you expect a sheepdog to protect the sheep if the farmer and the sheep keep kicking it - me
Reactions: 6716, xavierny25 and Redbeard

If anything it all looks nice. DJM makes a nice rear swaybar for these trucks aswell, adjustable for stock height and the lowered crowd. 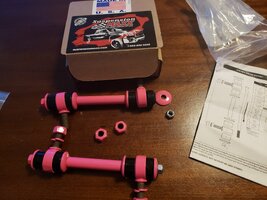 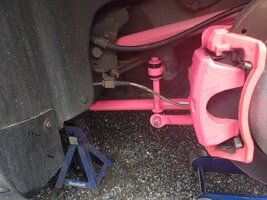 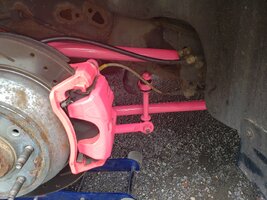 Toggle signature
This site is funded by you! If you have saved some money from help you received, please consider donating or becoming a supporter. All proceeds go to supporting the site. Thank you!
Reactions: Mooseman and Blckshdw

My rear sway bar is out.

Not because I'm cool but because I snapped one of the bolts trying to get the nut off to replace the insulator bushings, and so I just dropped the whole thing.

It sits kinda funny if it's not on a flat surface, a condition which I attribute to the lack of sway bar but maybe is something else. On a flat surface you'd never know it didn't have the bar.

Maybe I should have started this thread out this way: if I am going to re-build the rear suspension mostly to get new bushings all around, what all does it make sense to do? I get a lot of popping noises from the rear end.

As a handling guru, let me weigh in on rear sway bars.

Off-roaders like to take them off or disconnect them temporarily. But for 100% street driving, and especially cornering, I would not recommend disconnecting the rear bar unless one continues to drive at way below the limits of the vehicle.

The 360 platform was specifically designed to address the problem of high center-of-gravity on SUVs. (Remember the Ford Explorer fiasco, and the potential rollover issues with the Suzuki Samurai and Consumers Report magazine that ended up getting settled out of court.) Roll was designed to be less than 3 degrees in high-speed cornering, and they did some innovative work on the design, including mounting the engine so low that the front driveshaft goes through the oil pan.

The rear bar is an important component to that high-speed handling. If the bar is stiffened (such as with an aftermarket bar such as the Hotchkis) it changes the handling balance by reducing the built-in understeer and causes the truck to corner more neutral. This is the goal for experienced drivers.

I spend a lot of time on race tracks, and trust me, the Trailblazer platform does an amazing job on the track for a mid-size SUV. It handles very neutrally for its size. (I have a Hotchkis bar installed.)

Here in Canada, it also helps cornering at even slow speeds in icy conditions.

If you know what you are doing, one can really use a stiffer rear bar to tweak the handling. GM never designed the 360 platform as a police vehicle, but they very unofficially sold it to a lot of police agencies as an undercover and stolen auto unit vehicle, mostly because it is a) ubiquitous; b) has a tough frame for ramming if necessary; and c) goes like stink when it needs to.

But by removing the rear bar on the street entirely, it changes the handling balance toward understeer. No big deal if it is your grandmother getting groceries, but if you like to drive and want good handling, it is going to plow in corners a lot more.

GM knows handling. I learned that very early on when I started making part of what my wife laughingly refers to as a "career" by testing and writing about police vehicles. In fact, I once wrote about the difference between understeer and oversteer in handling dynamics. "Understeer is when the driver is scared. Oversteer is when the passenger is scared."

My two cents. (About .6 cents U.S.) If off-roading is the main focus, disconnect the rear bar. If good handling on the street is important, keep it connected. If better handling than stock is a goal, look at a stiffer aftermarket bar like the Hotchkis.
Reactions: xavierny25 and Mooseman

I am glad I have a rear sway bar, but I do a lot of mountain driving, at speed.. Not all of it on pavement! My wife wishes I would slow down. The XUV, although 200 lbs heavier than the Escalade I just sold, also handles the road much better than the Escalade.

The GMT360, although not perfect by any means, in fact it has quite a few things that make you go cross eyed, is still is the closest SUV America made that is near perfection!

Trying to change a motor mount, or a starter on a V8 model, will make you go cross eyed!
Toggle signature
Brian - Carpe Diem - I dont have to love my president, or any god, to love my country!! More people have died in the name of "God" than in all wars combined thruout history..
04 GMC Envoy XUV 204k - 01 Pontiac Aztek GT AWD 130k - 06 Eton 150 and 250 - 08 Can-Am Renegade 800R
Reactions: xavierny25 and Mooseman
You must log in or register to reply here.