Hey I was hoping someone may have some guidance on a nav head unit I recently acquired.

I recently picked up my second gmt360 and came across a nav head unit (delphi tnr 15800000 sticker) at a local pullapart which I grabbed. Once I did the read down of numerous threads it seemed, at least I thought, fairly clear that the LUX vs non LUX was relegated to the 2003/2004 model years so off I go. I went to test it doing the pull the radio fuse and turning the key to Acc mode before plugging it in, which led to the Delphi popping up once I plugged it in then flipping to a dark purple-ish background with the time in the bottom right of the screen. I was under the impression if the unit was compatible with your system the radio would still function normally pre having it reprogrammed to your vehicle and pre turning the car on after hooking up the unit. If anyone has any insight as to me possibly doing a step wrong or having misinterpreted compatibility that'd be wildly helpful. Also of note there's an additional plug (the mint green one, someone cut the wire prior to me getting it so couldn't tell what it led to) that's not on my factory radio. The first pic is of the plug and the second is of my stock head unit in case I left out any important details in regards to that. 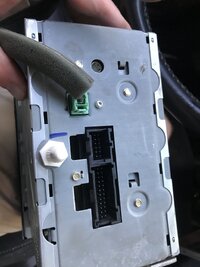 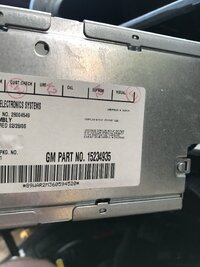 15800000 is a non-lux, and should actually be plug and play on your vehicle after VIN Clearing. I actually have a LUX and NON-Lux sitting in my garage that I am trying to sell.

Anyways, you do need to test it first. There is an easier way to test. With no radio plugged in, turn the key onto accessory, plug in radio. It will do the DELPHI splash screen, and return, and settle on a black screen with the time on the lower right hand corner. Press the Volume knob, and the unit should turn on. Test all features, fade, balance, bass, treble, sound, volume, tuning, cd player, if you have a nav disc and antenna test that as well. If every thing works, then its just a matter of VIN Clearing. Its a 5-10 minute job at the local dealer, they will want to charge you anywhere from 80 to 200 to do it.

The green plug is the GPS antenna thats needed for the nav to work. Pull the plug off and look at the internal terminal. There are variations on it, round, and square. You have to buy a exact replacement.

here is one example.. 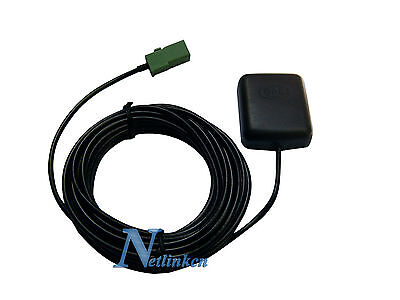 Moderator
If that works, try to find an independent shop or someone that has a Tech 2 that would program the VIN instead of going to the Stealership. Several members here have one. Maybe there's one near you.

Calling all Tech 2 and high end scanner owners
Need GMT360/370 Service Manuals? Get them Here!
Need Full Size Truck Service Manuals? Get them Here!
FAQ Threads
'02 TB EXT 4.2L '06 Saab 9-7x 5.3L '07 TB LS 4.2L '11 Caprice PPV 6.0L '08 Avalanche LTZ 6.0L
This site is funded by you! If you have saved some money from help you received, please consider becoming a supporter or donating. All proceeds go to supporting the site. Thank you!

Thanks for the replies fellas! I went back to the pull a part I grabbed the unit at to grab the antenna (luckily still there), now I'm trying to figure out if this is salvageable. In the pics below you'll see the connector and portion of the wire that was still attached to the nav unit (it was cut when I got it) along with the best I could do to capture the wire itself. It appears as though under the wire cover there are some thin silver wires along with a copper wire wrapped in a plastic tube that is wrapped in a foil. If that doesn't work I'll follow tollkeeper's advice and pick up the replacement which I found are also available on Amazon for the same price as ebay with the bonus of 2 day delivery with prime.

As far as testing goes I was able to get it to cycle to Delphi screen > then screen with time but couldn't get it to go beyond that. After a few pulling of fuses, disconnecting the battery, unplugging the unit itself (all in various combos) now I can't get it back to the clock in the lower right corner instead it strictly goes to theftlock. Is it possible the nav units can only get to the clock screen X number of times and then automatically go to theftlock? Worse yet did I permanently lock the unit? 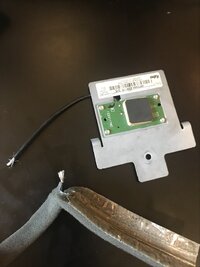 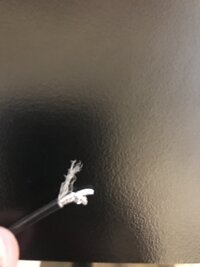 I would not spend any more money on that radio until you get a function test. There is no permanent lock, just a theftlock. You sure you are turning on your key only to accessory? Not On? If you are getting a Theftlock screen, it tells me you have the ignition turned to far.

Moderator
And I find the OEM nav is horrible and I have it with 2007 maps. Not spending $200 for an update disc. And no Bluetooth

. I'll probably pull this thing out and put in an Android HU. Already have a Bose compatible interface. Just the stock backup camera that I have to see how it connects.
Need GMT360/370 Service Manuals? Get them Here!
Need Full Size Truck Service Manuals? Get them Here!
FAQ Threads
'02 TB EXT 4.2L '06 Saab 9-7x 5.3L '07 TB LS 4.2L '11 Caprice PPV 6.0L '08 Avalanche LTZ 6.0L
This site is funded by you! If you have saved some money from help you received, please consider becoming a supporter or donating. All proceeds go to supporting the site. Thank you!

The updated nav discs are like 15 bucks on ebay? Thats where I got mine.

Edit: Looks like they have gone up in price a bit. Now 55 bucks. And my USASpec Bluetooth adapter works really well, cant complain.

2008 Avalanche Bluetooth adapter with satelite..
https://www.usaspec.com/p-371-bt45-gm20.aspx (much cheaper on Amazon, or eBay)

Moderator
I've seen some of those eBay discs brick OEM navs with Chinese junk on the screen. I tried to fix one guy's nav that was bricked like that with my Tech 2 and it was truly bricked. Be wary of them.
Need GMT360/370 Service Manuals? Get them Here!
Need Full Size Truck Service Manuals? Get them Here!
FAQ Threads
'02 TB EXT 4.2L '06 Saab 9-7x 5.3L '07 TB LS 4.2L '11 Caprice PPV 6.0L '08 Avalanche LTZ 6.0L
This site is funded by you! If you have saved some money from help you received, please consider becoming a supporter or donating. All proceeds go to supporting the site. Thank you!