The 10 foot paint job & how do I adjust body panels?

Hey there forum people. I discovered this place when trying to figure out if an Envoy tailgate would fit a TB (I can confirm a 2003 Envoy to 2003 TB works) and through a bit of discussion it’s been brought to my attention that people like pics.

I’ve decided to do a cheap Tremclad facelift on this TB that has significant cancer on the doors, hood and tailgate. Instead of messing around with fiberglass. So I picked up some solid panels from the wrecker and the job has started.

Over the weekend I’ve managed to get under the hood, the inside of the doors and the door jambs painted. For Tremclad, it’s not turning out too bad.

But I have an issue now. The rear passenger door latch is sitting about 1/4” too high on the body. Is there a way to adjust this? Another issue on the passenger side is the front door is binding on the fender and when I’ve loosened all the bolts, it doesn’t seem to have adjustment to slide forward. I’ve gotten the hidden one at the bottom by the wheel and the upper one behind the door as well as the ones along the top of the fender. Did I get them all? 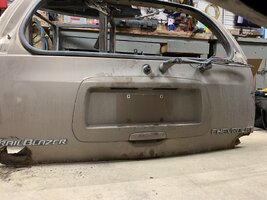 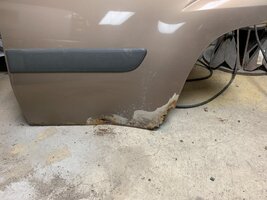 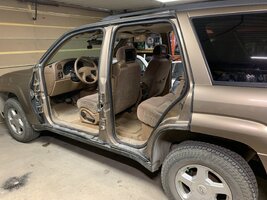 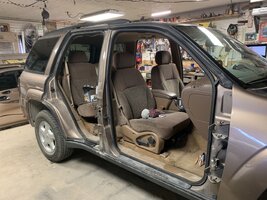 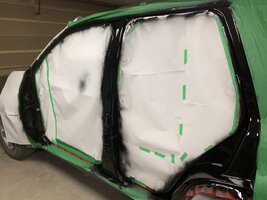 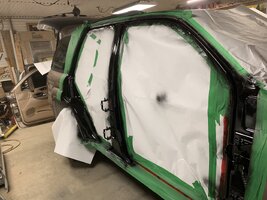 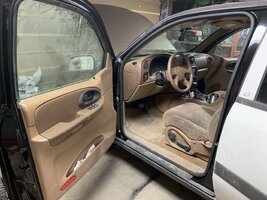 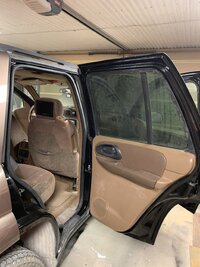 Moderator
Do the doors themselves sit straight? I'd make sure those are square as possible first as you don't want air/water leaks from the door seals.

Sparky said:
Do the doors themselves sit straight? I'd make sure those are square as possible first as you don't want air/water leaks from the door seals.

I don't think the latches adjust on the doors, but the strikers on body side do.
Click to expand...

The body lines and gaps at the rear door are ok. It appears that this truck was hit at one time as the front passenger door was a different color under the door panel and the rear door where the gasket is supposed to attach has had the push pin holes bondoed over. The previous doors worked perfectly fine.

JimInRadfordVA said:
I'm absolutely done with the silver on my TB. I'll follow your thread to see about doing the color change. Thanks for the pics.
Click to expand...

Just to be clear, Tremclad or Rustoleum is not an automotive paint. If you ever want to paint over it again with actual automotive paint, the vehicle will have to be stripped down to bare metal. Also, the Tremclad paint job can look pretty decent, but will never compare to a real paint job. Hence it being called the 10 foot paint job. Looks pretty decent overall, but up close you can tell it’s not professional.

Silver Supporter
Not too bad. Anyone purchasing that in the future will probably think that it was originally black and repainted, but I'm sure a quick explanation will do just fine. It came out pretty nice!

I tried looking up that Tremclad and found that local stores were only in Canada. I myself, am a Por15 customer, but always willing to try something new.
OP
OP
F

Tremclad is Rustoleum in the US

So far I’ve only gotten the inside of the doors and the jambs painted. I’ll be prepping the body in the evenings this week in hopes of painting the exterior next weekend.

This is how it’s sitting right now. The front driver door of the donor was painted at one time but it wasn’t prepped proper. I scraped the entire door with a razor in about 10 minutes. 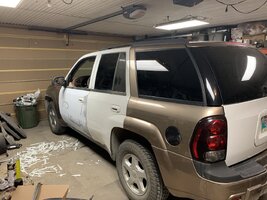 I'm hesitant to reply to this because, i don't want blamed if it fails, so use the info at your own risk. i once replaced a door on a chevette that didn't line up correctly. So with the door open, i placed a long 2X4 on the floor of the car and under the door and pried it up a little. i also witnessed a guy replace a hood and he ended up laying a 4x4 across the fenders and semi slamming the hood, it worked like charm. if you were going to try something like this, go EASY! you don't want to over do it, just get the metal to bend a little. another way to adjust things, sometimes you can place a washer/shim in between hinge and the post.
OP
OP
F

I’ve done that trick in the past too. It does work but you gotta be gentle like you said.

I did get the doors lined up. I was able to slide the fender forward a touch. I missed the bolt behind the front bumper and that’s why it wouldn’t move. For the rear door, I was able to lift it just enough by putting a washer on each pin. This raised the door just enough where the latch will catch nicely.
OP
OP
F

A little update. With the exception of the new hood and a few trim pieces, the Tremclad paint job is done. If you decide to do this, like with any paint job, prep is key. I only sanded down to 200 grit. For a smoother job I could’ve gone finer, but this isn’t a show truck by any means. It turned out not too bad. I could go a step further and wet sand it to get rid of the orange peel texture, but I really don’t care to the truck is now all one color and there is no rust. I’ll take completed pics in a day or 2. 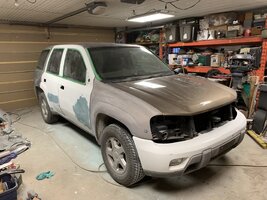 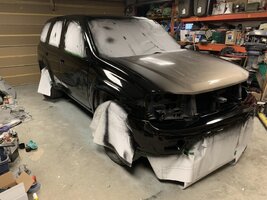 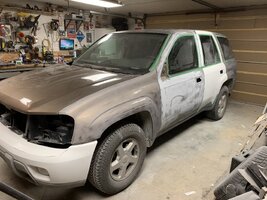 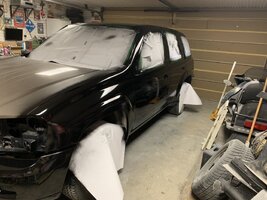 Ok. Here it is. All back together. Cut and buffed. Not great but acceptable. A few sags in the paint here and there too. My wife is happy her daily ride is no longer brown and rusty. 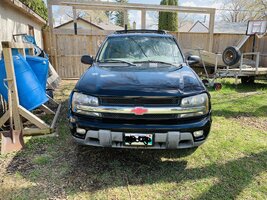 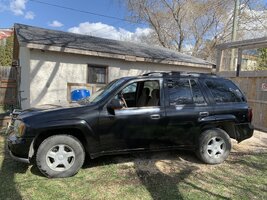 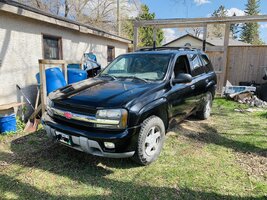 Moderator
That actually looks quite decent!
Need GMT360/370 Service Manuals? Get them Here!
Need Full Size Truck Service Manuals? Get them Here!
FAQ Threads
'02 TB EXT 4.2L '06 Saab 9-7x 5.3L '07 TB LS 4.2L '11 Caprice PPV 6.0L
This site is funded by you! If you have saved some money from help you received, please consider becoming a supporter or donating. All proceeds go to supporting the site. Thank you!
It takes less time to do a thing right than to explain why you did it wrong - Henry Wadsworth Longfellow
OP
OP
F

It’s one of those good from far but far from good. If you’re looking for a cheap facelift, it’s a good way to go. Prep is key. Up close you can see my sanding marks but I only went to 200 grit I think. Maybe it was 180. A smoother finish would require more prep.

I did this with spray bombs. To get it to not appear blotchy, you have to fog the panels and get complete coverage in about 3 passes. Including the door jambs, I was about 12 cans. Just under $100.

Moderator
I dig it. Get some of the plastic renew for the gray stuff on bumper and it will be really nice
The night is my companion and the highway is my home
Got me seeking for one last beacon, every single place I roam

I think it looks great! My ext is just rusting out, I have a hole I can put my fingertip through on the rear hatch. It just makes me sick seeing so many trailblazers on the road here in much better shape rust-wise than mine. So I am starting to look for body parts at the wrecking yard. How did you prep it besides sanding it down to 200 ?
OP
OP
F

I took off everything that unscrewed, sanded it until there was no gloss and wiped the entire truck down with lacquer thinner. I also filed in and feathered a few dents.

I cannot stress enough that the finer grit you sand to, the smoother the paint will be. I only did one coat of paint...a fairly thick one, but still just one. For a better job, I could’ve sanded with 400 or 600 grit and done another coat.

After the paint had cured about a week, I went over the entire truck with a buffer and buffing compound.
J