Has anyone modded the front door speaker mounts to accomodate something larger than 6-1/2" or 6-3/4"? I want to improve my front mid-bass but don't want to cut the door panel. I am actually thinking about seeing if the Kenwood 7" components will fit, but the fact that the factory location, at least for my 05 TB, also holds the factory tweeter (I moved mine to the 3-1/2 dash locations), I am wondering if 6x9 components would work? Obviously, I would have to make some sort of adapter, but I am concerned if adjusting for magnet-window clearance would put the surround too close to the door panel.

Hopefully someone else has done a similar mod and can pass on their wisdom. Thanks.

Lifetime VIP Supporter
You'll actually get more / better quality bass from a round, vs. an oval woofer cone. I'd stick with rounds, unless a vehicle had 6x9's stock in a rear parcel tray or a sail panel, and I didn't want to mod the mount (or 6x8, if you're stupid enough to own a Ford...lol).

The front door cutouts are 8", IIRC, but they're not round. If you're really jonesing for 6x9 in the front door, I think you could probably make it happen, with some work. I'd definitely enclose the remaining open area with some baffling. Scosche (used to?) makes adapters for this mount; they might help with the potential clearance issue you mention. And shallow mount aftermarket speakers are available, of course.

Gold Supporter
The factory Bose front speaker was some oddball 7.75 inch speaker or something like that. I see no reason why a 7 wouldn't fit...
"By perseverance, study, and eternal desire, any man can become great." - GENERAL GEORGE S. PATTON
"You write your own book, and what does the next page say?"-Myself
Oh no.... I've.... caught.... the.... mod.... bug....

Silver Supporter
IF it was the Bose system, the front door speaker is 7" (I pulled mine out on Sunday and measured it) but the problem you'll have is that most 7" speakers that are available (in 2 ohm that the OEM amp requires) will not fit. I'm in the process of looking at speaker replacements and I can only get 2 ohm 5 1/4" speakers in there...even the 6 1/2" same brand, same series won't fit, according to Crutchfield.
American as apple pie...but still as Aussie as a meat pie!

I put 2 8" subs in my front doors just for kicks. I had to make up some brackets from 1/2" MDF. I removed the original brackets traces the shape and cut to size made 2 speaker rings and screwed in the speakers. 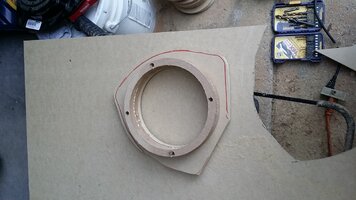 I didn't need the 2nd ring on each because the subs are low profile but it was to late and all glued up. 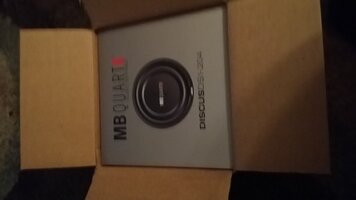 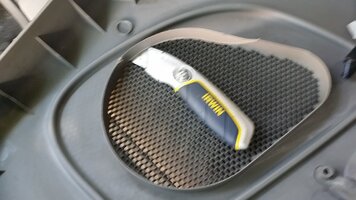 I later also saw I had to do some trimming on the door panel. 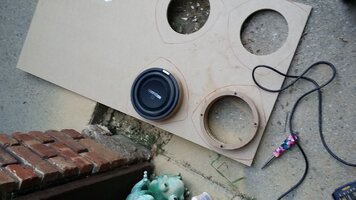 This was a bad idea all the way around, everything on the door panels rattled and was just annoying. I went back to my storage of goodies and slapped in some infinti 6.5 component speakers with new trim plates sold on Amazon iirc they are the scosche brand and I've been happy with that.
This site is funded by you! If you have saved some money from help you received, please consider donating or becoming a supporter. All proceeds go to supporting the site. Thank you!

Forgot to post up the pic with them on the truck. 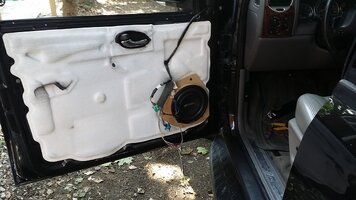 Silver Supporter
I think I'm going to ignore Crutchfield and get the 6 1/2" components and make them work...I just can't do 5 1/4" woofers.
American as apple pie...but still as Aussie as a meat pie!
OP
OP

Thanks for the feedback guys.

Matt, check out the Kenwood KFC-X1800C speakers. Admittedly, I have not heard them personally, but from what I have heard from others, they out-perform 6-3/4's in the same price range.

Currently, I have 6-3/4 A-series Pioneers in my doors, so improving on midbass isn't a stretch and could be done by upgrading to the D-series, but the Kenwoods cost about the same and I am keeping my mind open about other options, like using 6x9's. The fact that the factory Bose are 7's has me looking more at the Kenwoods though. The system in my TB was aftermarket when I got it, but I have found no evidence that it originally had Bose.

Reprise, while I am not opposed to using the factory rear locations, they are currently disconnected as the fronts and subs are amplified and they were not. Due to the nature of headunit vs amplifier, the rears were distorting long before the fronts. Even still, I only use rear speakers for giving my kids sound when the volume is low and usually keep the fader set so that they don't mess with my front stage. Not that I am a staging purist by any stretch, but I do prefer it.

I don't think I would put subs in my doors without making completely custom panels, which I don't want to do and sound deadening the crap out of the doors.. As Xavier found out, it would turn the doors into rattle traps. I keep my map pockets empty with the exception of some small travel umbrellas, but my wife sometimes stuffs things into the passenger side one and the and the resulting vibrations drives me nuts. If I were to move some sub bass to the front, I would build a new console and find a decent 8" for there, but currently I am happy-ish with the 2 10s in the rear. I just want to improve the 80-200hz 'bump' bass in the front.

BuffettTruck said:
Matt, check out the Kenwood KFC-X1800C speakers. Admittedly, I have not heard them personally, but from what I have heard from others, they out-perform 6-3/4's in the same price range.
Click to expand...

Here's the problem, I have to run 2 ohm for the fronts because of the OEM amp, which is working great and I'm not going to replace. Running 4 ohm speakers in the front in place of 2 ohm will kill volume levels, so I'm limited in what I can get.
American as apple pie...but still as Aussie as a meat pie!
OP
OP

Oh, gotcha. I misread your earlier comment and thought you were having a hard time finding 4 ohm 7's. My bad.