I meant to submit this a couple months ago, hopefully this article is complete enough for anyone to tackle this job, I guess we can edit in the future if needed.

I started this job as I was changing my front struts/springs and steering rack. I figured I would get everything into place before the alignment.

I was able to complete this job with a few simple tools, I did source a ball joint tool which is avail for rent at a parts store, I lucked out and my neighbor had one. I'm sure there are other more "dedicated" tools that could work more effectively but this turned out easier than planned. I'm confident that by viewing this thread, any tool changes could be substituted easily by the user as they see fit.

I replaced both of the lower strut bushings with the MOOG K200270. 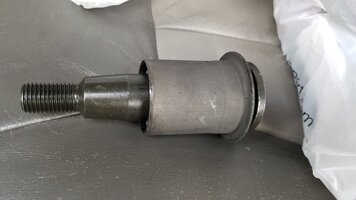 These were in dire need of replacement, I could easily move the RH stud inside the bushing with a screwdriver.

You will likely need to raise both front wheels and loosen both strut assemblies by their two upper mounting bolts before you remove the lower strut mounting yoke from the lower control arm, thus allowing the LH & RH suspension to fully hang down. This should keep you from needing to loosen or remove a sway bar link.

Once the front end was secured on the frame with jack stands allowing the entire suspension to hang, I loosened the top two strut mounting bolts on both the LH & RH struts to ensure there was no tension on the lower strut yoke at the bushing. 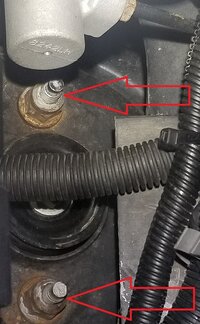 DO NOT REMOVE THE CENTER NUT OF THE STRUT ASSEMBLY 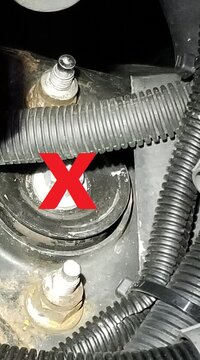 You may need a floor jack to lift the lower control arm to re-position the lower strut yoke onto the new bushings once installed. I used this as a secondary safety to the tire and wheel under the frame also. 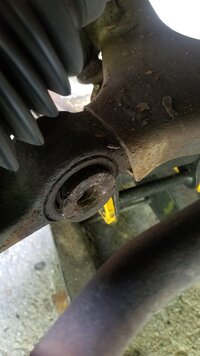 The lower strut yoke may come off with a few blows of a 3lb sledge, this side needed more persuasion. 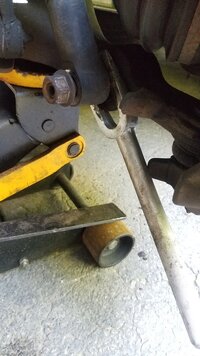 Once the strut yoke is free from the bushing, remove the two upper mounting bolts and set the strut assembly aside.


I borrowed a ball joint tool and used these 2 pieces in conjunction to the press: 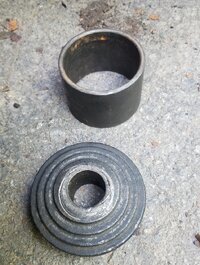 For removing the strut yoke mounting stud from the old bushing, the press used with the ball joint kit wasn't large enough to fit around the stud and the receiving collar on the other side. However it was fine for pressing the remaining portion of the bushing from the lower control arm.

I had to use my 8" C-Clamp which was originally delegated for compressing brake calipers.

The idea here is to force the mounting stud or post, back through the bushing housing by breaking it away from the rubber, thus destroying the bushing.

Once you begin to press the mounting stud, there is no turning back, the bushing will need to be replaced before you can operate the vehicle again so have the new one handy. 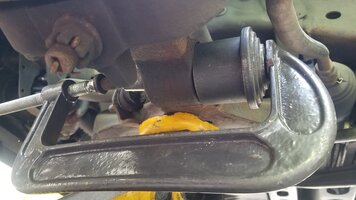 I used the collar that was just larger than the bushing, I believe the collar was 3". The largest part of the bushing measures just over 56MM which is roughly 2 1/4".

The RH side broke free without much force, the LH side put up more of a fight and was taking a toll on my C-Clamp. Just continue until you feel the back side of the mounting stud bottom out into the end of the clamp. 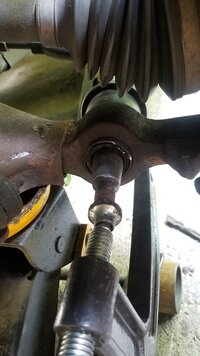 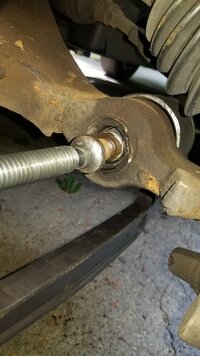 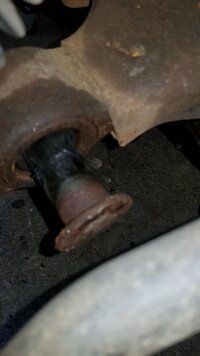 At this point just push it through 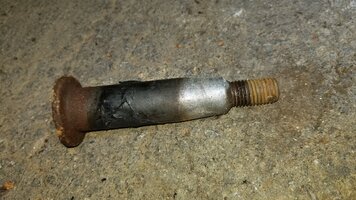 If you have a tool this size then you could press the bushing out without breaking the rubber surround, but the stud works perfectly. 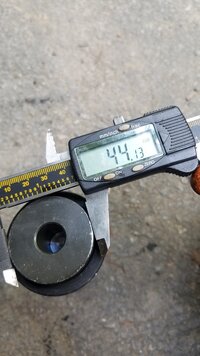 
Placing the mounting stud back through the bushing in the opposite direction, you can now use the ball joint press to remove the remaining portion of the bushing. 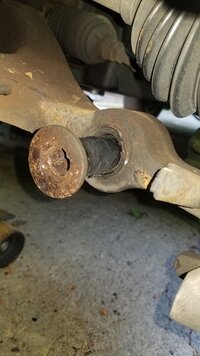 Set the tool up in this manner 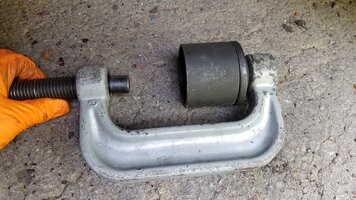 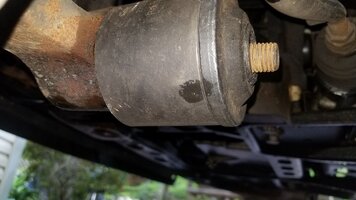 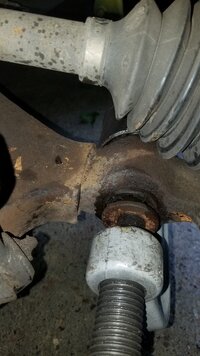 This is easier than a C-Clamp since you can use a ratchet or breaker bar on the press. Also doubtful a cheap C-Clamp would hold up to these forces.

Once I started to press the bushing out, I had to stop and apply some heat. 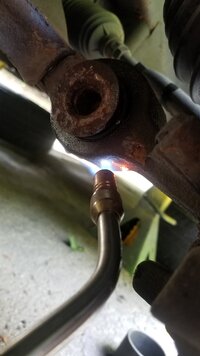 Continue to press the bushing until you feel it break free. You will see the head of the stud is a perfect fit inside the bore, I felt no binding during the process. 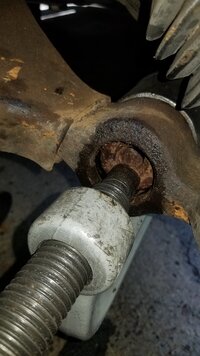 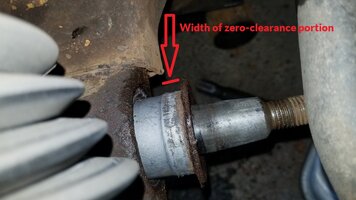 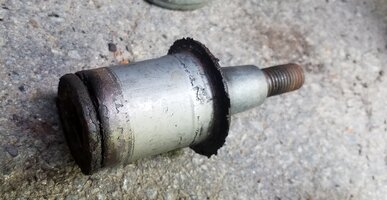 To install the new bushing, I would clean up the bore and remove any debris. This pic of the bore is from the RH side, but the process is the same. 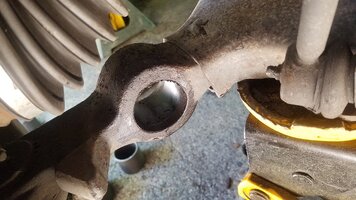 Insert the bushing into the lower control arm with the threads facing forward. 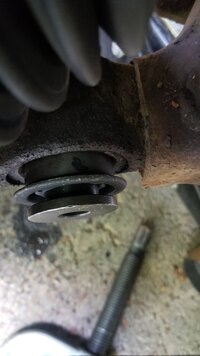 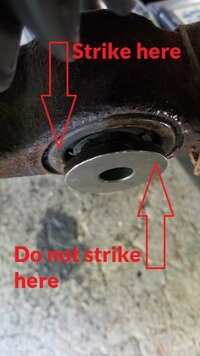 I used the old mounting stud to seat the new bushing. Lightly hit the old stud with a hammer moving around the diameter as you go, a few hits at a time. 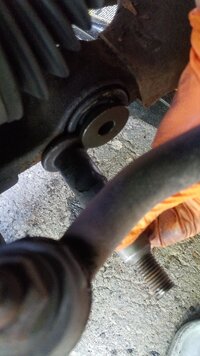 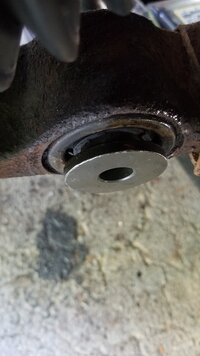 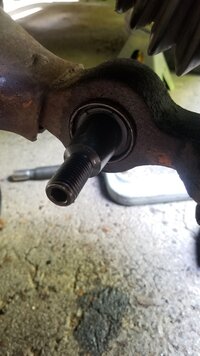 When finished with the first side, leave the strut assembly off of the vehicle until you finish the other side, or just secure the top of the strut assembly to one side leaving the yoke hanging free. This way you won't have to fight the tension of the sway bar.

Once finished with both the LH & RH lower strut bushings, take the strut assembly and secure the top two mounting bolts but do not tighten at this time. This will allow movement to seat the yoke onto the bushing.

Once the yoke is placed on the new bushing, secure the yoke using the 24MM mounting nut and just snug the bolt. The center hex of the bushing is 8MM, I used a 8MM hex bit with a 24MM wrench to get the yoke snugged down before fully torquing, only to lessen the chance of the new stud from twisting inside the bushing. You may not need to do this.

Tighten the two upper strut mounting bolts to 33 foot-pounds on each strut assembly.

Tighten the yoke mounting nut to 82 foot-pounds on each assembly.

The C-Clamp did turn into a different tool after the LH bushing. I would advise to use a good, high quality 8" C-Clamp or larger.

Overall the process was easier than I expected, I thought there was more of the bushing that was in contact with the lower control arm. Not a difficult job and I would recommend this in addition to replacing the struts, especially if they have some years and miles on them.
Last edited: Sep 6, 2020

Lifetime VIP Supporter
Excellent write-up. From recent experience in a different area, lubing the threads on the forcing screw (c-clamp, in your case) with some grease does help with lessening the force required to turn the screw.

by using this site? Consider purchasing a supporting membership - if you saved a trip to a dealership / garage, you're already money ahead! ALL proceeds go ONLY to maintaining the website.
Tech2 owner, covering N. IL / S. WI areas.
"Good judgement comes from experience. Experience comes from bad judgement."
OP
OP

The threads had a tiny amount of residual spray from an earlier job, months ago, but nothing to make a difference. You are correct as some lube at the ball socket and threads would have very likely made the job easier and possibly save the clamp.
Last edited: Sep 6, 2020

For the longest time, we kept suggesting to replace the whole control arm as this job looked tough. Still applies if you also have to replace the ball joints and A-arm bushings.

Never would have thought of using the old stud. That's genius right there!
Need GMT360/370 Service Manuals? Get them Here!
Need Full Size Truck Service Manuals? Get them Here!
FAQ Threads
'02 TB EXT 4.2L '06 Saab 9-7x 5.3L '07 TB LS 4.2L '11 Caprice PPV 6.0L
This site is funded by you! If you have saved some money from help you received, please consider becoming a supporter or donating. All proceeds go to supporting the site. Thank you!
How do you expect a sheepdog to protect the sheep if the farmer and the sheep keep kicking it - me
OP
OP

I put these off for a few years as well, didn't want to change the LCA after I already replaced the bracket and a new alignment not too long ago.

Using a dial caliper, I checked the head of the stud first, then the OD of the bushing on the opposite side. I don't remember the measurement but it was very close so I gave it a shot.

Worst case it would have been sitting for a few days, luckily all worked out.

Moderator
Great write up! I wish you had posted this before I dug into my front suspension issues, I would have much rather have done this, than the whole LCA (although they were gonna be due sooner or later)
Carlton - You can't have my fish, but if you ask nicely, I'll help you catch your own

Lifetime VIP Supporter
It's funny (to me) that this thread came along, as I noticed the outer edge of one of my rear bushings was torn on the Sierra, as I was replacing the sway bar links, and I figured I needed to replace them, too.

Last time, on the 'old' Sierra, I ordered up new LCA assemblies. Which I don't want to do this time, as this truck doesn't have the original LBJs, and I consider it a waste to dispose of the metal arm assembly (which, btw, is a forged piece, on the trucks with the torsion bar suspension). They also cost 3x as much as the bushings & ball joint alone, and cost a fortune to ship.

Anyway, I had looked online for the best way to get the bushings out, and came across one of Chris Fix's old videos - he used a ball joint press, as it turns out.

Lifetime VIP Supporter
This probably has more to do with my side than yours... but since all of the images are listed above in their Full Sizing... many do not expand and leave only the artifact of your Number or Letter Naming Conventions. Any chance you can post them up to either Flickr.com or Photobucket.com and link them back here? Otherwise... This is the Best Format for creating a worthwhile Article EVER ...and I enjoyed 'looking over your shoulder' in the doing of everything very much.

Blckshdw said:
Great write up! I wish you had posted this before I dug into my front suspension issues,
Click to expand...

Thanks! I guess if you worked on your front suspension before the end of June I won’t feel as bad...

@Reprise When you do take on these bushings, one thought that came to mind is possibly trying a good 8MM hex with a breaker bar or two of the 24MM nuts locked together with an impact rotating the bushing stud instead of pressing it out.

Not sure which one would be easier but might be worth a try.

MRRSM said:
many do not expand and leave only the artifact of your Number or Letter Naming Conventions
Click to expand...

Not sure what you can or cannot see. I tried opening the pics when logged out and I had to log in to see them, didnt expect that.