Moderator
I thought I should wet a line earlier when hunting. I like that setup...may have to try that.
The night is my companion and the highway is my home
Got me seeking for one last beacon, every single place I roam

Just called my oldest brother. Soon as he gets here were going to load the truck up and head out to Lower Douglas Lake. Going to fish the fork of the lake where the inlet from Upper Douglas Lake is. Should have the greatest water temperature.

The canopy works nice. There are not any walls but we put a tarp up if there is alot of wind to keep the blowing rain off us. Winds will be about 8mph from the south. Wind should be from behind us. The envoy should block the rain from blowing in.
2008 Envoy SLT 4x4 from Kentucky

Moderator
How did ya do?
The night is my companion and the highway is my home
Got me seeking for one last beacon, every single place I roam

Did not catch anything worth keeping. The weather started looking real bad on the radar map. Headed in at 1am before the 30mph winds got there.
2008 Envoy SLT 4x4 from Kentucky

Got a couple lines wet with chicken liver.

Fishing in the rain. Didnt catch anything worth keeping. Parked under a cedar tree and hung out under the lift gate.

Seen a strong storm front moving in this evening. My brother and i loaded up the envoy and went out to the lake to catch some catfish during the storm. All of the sane people were leaving the lake as we were arriving so we had our pick of the several drive your truck up spots. Chose one that had tree stumps on the opposite bank that was with in casting distance. It was a light drizzle when we got there. Jumped out and set up the canopy real quick and got it staked down in case the winds picked up. The winds got pretty strong but we had trees on both sides to break the wind. Did not get too wet from the horizontal rain. It only rained hard for about an hour. There was not much lightning but there was one strike that did more than just light up the water. It blinded us to the point that it took at least ten seconds before i could see the glow sticks on my bobbers again. It was a pure white flash with thunder ~9 seconds later.

I run a light 14# line on my poles so i can cast to the other bank with a 1oz weight. Normally the largest i catch from this lake is about 10#. We were getting hits consistently but was also getting robbed. Possibly turtles. The five times the circle hook set, my line broke before i could get the fish in. Three times the fish must have went around a tree stump. One time it just got off. The one that i got to the bank was huge, 25# easy. This cat was not fitting in my net so i had to drag him onto the bank. He was almost close enough to grab. Fracking line broke and he got away before i could get a hold of him. Got a wet foot in the process. I would have let him go anyway though. Came home empty handed but had a good time.
2008 Envoy SLT 4x4 from Kentucky 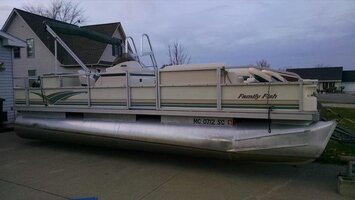 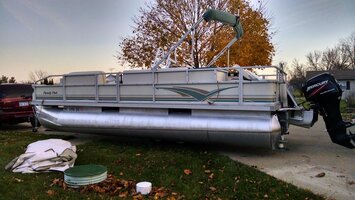 I have been thinking about getting a pontoon instead of a fish/ski. More room to move about. How would a pontoon do on a large river like the ohio or mississippi with barge traffic? Can you put a trolling motor on a toon?
2008 Envoy SLT 4x4 from Kentucky

Fishing opener is in two weeks here :woot: . I'm trying to get the boats ready. I have a 14' Alumicraft with a 12hp for fishing, and a 17.5' Carvelle with a 400hp 455 Oldsmobile big block for extreme fishing.

DAlastDON said:
I have been thinking about getting a pontoon instead of a fish/ski. More room to move about. How would a pontoon do on a large river like the ohio or mississippi with barge traffic? Can you put a trolling motor on a toon?
Click to expand... 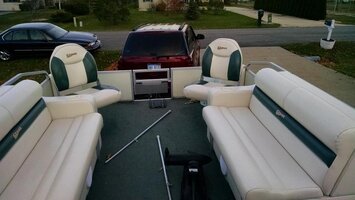 The square metal plate at the front of the boat is for the trolling motor.I have a Minn Kota motor with foot controls.Its hooked to its own battery.
2007 Chevrolet Trailblazer LS 4X4
2007 Pontiac Grand Prix GT ------ Reid
You must log in or register to reply here.
Share:
Facebook Reddit Pinterest Tumblr WhatsApp Email Link