Hey Guys
I posted this on another forum also .Looking for as many opinions / options /ideas as possible .
Need help,This passed rain storm my 08 trailblazer 4.2 133k miles ,got bogged down in deep water .It stalled out and I was floating for approx 3 hrs.Water was ankle deep inside.Got pushed to high ground,waited a while it started right up. Driving home it loses power then kicks back in .If I put it in neutral the engine runs fine and back in gear it goes a while then drops down again. The next day I removed all carpets and padding Mechanic says he cant get any scanner readings .And wont touch it.
No water in oil or tans ,
Little history: its a work veh and idles for long periods . At one point the throttle body was replaced with a Bosh unit ,dont know why .After that the OBD light stayed on .
I dont want to give up on it just yet,any suggestions?

Dave 26 said:
I dont want to give up on it just yet,any suggestions?
Click to expand...

This kind of stuff can make you go crazy. This is why flooded vehicles are almost always totaled, it just isn't worth the time and money spent, especially on a vehicle this old...

When you indicate with, "Mechanic says he can't..." it implies that perhaps you won't be doing the work. But let's start with some Basic Things To Do since you've become a U-Boat Commander:

(1) For Powers and Ground... Read EVERY Post in THIS Thread and have your Mechanic do likewise:

While troubleshooting a bad ground I came across some scans of the service manual regarding electrical ground locations for our platform posted on another site. This includes both short and long wheel base, as well as both 4.2L and 5.3L. Credit goes to Wex...

(2) In order to confirm the Class 2 Network Grounds to the DLC Connector under the Dashboard Knee Bolster... Have your Mechanic watch THIS Video:


(3) Pull the Engine Oil Dipstick and confirm that the Engine Oil does NOT resemble Chocolate Milk. Change the Oil and the Oil Filter if this situation prevails.

(5) Know that Brackish and Salty water will instantly set up conditions for RAPID Metal Corrosion and Rust. Since the process will CONTINUE to develop over time...you must be diligent in getting ALL of the Bonding Wires connecting ALL system Engine and System Grounds to the Body of the SUV cleaned down to Bare Metal and after applying Dielectric Grease... re-attached to one another.

(6) For the Interior areas, get a half-dozen of THESE and hang them around inside of the Cab from front to back to De-Hydrate EVERYTHING: 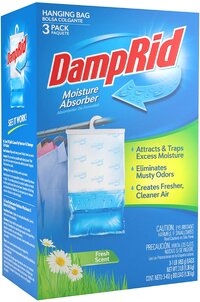 Glad the oil and trans fluid appear good, and the truck still tries to run! That at least sounds like your engine didn't suck water. Next thing would be to figure out why the CEL is on. I suspect the reason your mechanic couldn't get a scanner reading is because your OBD port is dead. Check fuse #13 in the under hood fuse box. If power was interrupted because of the flooding, that could have reset some of the engine control parameters, which could be why the truck keeps faltering. You may also have some water damage to the interior fuse box, especially if the water inside the vehicle was sloshing, or to sensors/wiring elsewhere in the truck. Do you have your own OBD scanner that can see codes and real time data?

Northcreek is right about the nightmare flooded vehicles can be, but with some initial effort you might get some more information that can help you figure out just how far you want to go with it.

The replacement throttle body was causing the CEL *before* the flood event, if I'm reading that correctly. In that case, you're fighting a pre-existing condition *plus* whatever damage the flooding did. Any way you can find out why that got replaced? If the throttle body had a problem already, and then the flooding caused any system resets, the truck is probably using parameters for a clean, properly functioning throttle body. If yours wasn't working properly already (assuming whatever that code is *is* for the throttle performance), those parameters may be unable to properly operate the throttle body. Usually that throws the truck in to reduced engine power mode as well...usually.

You could also have damaged O2 sensors or even the catalytic converter from the flooding, which can affect how the truck's computer controls the fuel/air mixture.

If the flooding water splashed at all at the front of the truck, also check your air filter. If it's soaked or has debris in front of it, it won't pass air properly,

So, Just my opinion, but I'd say get the truck as dry as possible, figure out power to the scanner, find out what codes are present. That's at least a starting point. If you have a multimeter, start checking all your fuses, too. No telling what the flooding may have caused to blow.

IS the check engine light ON? As suggested work on the most basic problem... OBD interface issue which basically needs some basic electric checks for power, ground and continuity. Go from the result. IF you are expecting to have someone do the troubleshooting effort for you (ie. paid service), it is highly likely that it will be expensive and time consuming ($$$) as the water could have ingressed in lots of locations and as noted will likely start the "badness" from this point on.
Toggle signature
2008 TB 4.2l

Ifyou had ankle deep water in the truck, then the BCM is probably toast. If it's still there, disconnect the OnStar module as it's also on the floor under the rear seat and may be throwing garbage onto the network, preventing reading codes. Check under the rear fuse box for any shorts.

Once you get it running reliably and can read codes again, I would also consider replacing the O2 sensors, as already mentioned, as they do have a passage for fresh air on them although they would not prevent it from running and would just throw codes.
Toggle signature
Need GMT360/370 Service Manuals? Get them Here!
Need Full Size Truck Service Manuals? Get them Here!
FAQ Threads
'02 TB EXT 4.2L '06 Saab 9-7x 5.3L '07 TB LS 4.2L '11 Caprice PPV 6.0L '08 Avalanche LTZ 6.0L 2021 Sierra Elevation 3.0L Duramax
This site is funded by you! If you have saved some money from help you received, please consider becoming a supporter or donating. All proceeds go to supporting the site. Thank you!

How do you expect a sheepdog to protect the sheep if the farmer and the sheep keep kicking it - me
Reactions: JerryIrons
OP
D

Everyone thanks for the help
Im not much on electronic diagnostics ,so im learning as i go along. I need to get this running at least through winter. I pulled all wiring harnesses apart cleaned with electronic spray and CRC wire dryer . I did notice one of the computer boards some of the chips were blue.

Where was this board located? If it's next to the fuse box, that would be the body control module. Without it working peoperly, you're dead in the water.
Toggle signature
Need GMT360/370 Service Manuals? Get them Here!
Need Full Size Truck Service Manuals? Get them Here!
FAQ Threads
'02 TB EXT 4.2L '06 Saab 9-7x 5.3L '07 TB LS 4.2L '11 Caprice PPV 6.0L '08 Avalanche LTZ 6.0L 2021 Sierra Elevation 3.0L Duramax
This site is funded by you! If you have saved some money from help you received, please consider becoming a supporter or donating. All proceeds go to supporting the site. Thank you!

Yes it was attached to rear fuse box ,a couple chips were blue . Like i said its running and actually driving a little better .seems currently not losing power . I appreciate the help . although some of your tech talk is over my head . Im trying to follow . I dont mind paying for good work,. Any recommendations for a good GM electric specialists in North Jersey ?

Maybe @NJTB can recommend someone. Not sure if anyone else is from NJ.
Toggle signature
Need GMT360/370 Service Manuals? Get them Here!
Need Full Size Truck Service Manuals? Get them Here!
FAQ Threads
'02 TB EXT 4.2L '06 Saab 9-7x 5.3L '07 TB LS 4.2L '11 Caprice PPV 6.0L '08 Avalanche LTZ 6.0L 2021 Sierra Elevation 3.0L Duramax
This site is funded by you! If you have saved some money from help you received, please consider becoming a supporter or donating. All proceeds go to supporting the site. Thank you!

I would probably throw some Heat Fuel Additive and Dryer into the tank. Water may have gotten in there, and that would cause some odd idles, and misfires.
Toggle signature
Brian - Carpe Diem - I dont have to love my president, or any god, to love my country!! More people have died in the name of "God" than in all wars combined thruout history..
04 GMC Envoy XUV 204k - 01 Pontiac Aztek GT AWD 130k - 06 Eton 150 and 250 - 08 Can-Am Renegade 800R
Reactions: christo829 and Mooseman

When you say some of the chips are blue, do you mean corrosion? Or does it appear to be more of a plastic or epoxy coating? Maybe get some images posted up?

Some of the smaller SMD (surface mount device) can be blue, like this... 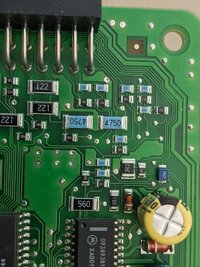 Overall should look clean with no whitish crud on it.... 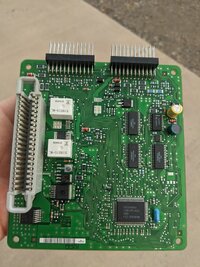 The two micro relays (white boxes) could be a concern as you cannot get inside them.
Reactions: MRRSM and christo829
OP
D

Yes that looks exactly like it ,there was some corrosion forming but I got to it. The service air bag warning is on . Should I pull the fuse just so it dosent go off?

No, just leave it alone. If I remember correctly, the SRS module is under the seat, and likely got soaked. May have to replace that module.
Toggle signature
Brian - Carpe Diem - I dont have to love my president, or any god, to love my country!! More people have died in the name of "God" than in all wars combined thruout history..
04 GMC Envoy XUV 204k - 01 Pontiac Aztek GT AWD 130k - 06 Eton 150 and 250 - 08 Can-Am Renegade 800R
OP
D

Thanks to all that helped.
Really appreciate it .Didnt want to buy another one.
Today I drove it around town .Runs well maybe better than before .LOL. No issues losing power going up steep hills .Had it up to 65, acceleration seems normal.
Reactions: Blckshdw
J

Keep an eye on things, whatever got wet may start rusting up some over time. Not that it's high priority, but all your speakers work?

I had a little "incident", and ended up pulling everything, carpet, padding, center console, all the seats except for the driver seat lol, people got a big kick out of seeing the inside of that. Here's one with 2 seats (it's an EXT). The problem is that there are lots of nooks and crannies where water runs into and sits for a bit, as I'm sure you can see in your own vehicle. I drove it around for a while like this. 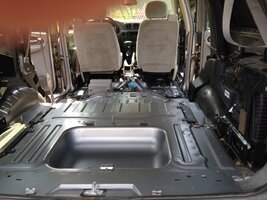 Let's hear the details on the "incident"

Yes the speakers got wet but still work, I've been it driving it all seems ok.
How do you get the door panels off?

Lower the Volume in advance of playing this Video: