SOLVED! The Mystery of the "Under Hood Rattler...:

So around 4:30 AM EST or so… I was getting a Little Antsy about heading out to my Y2K Blue Silverado in the Driveway and cranking it over to ensure that my Reliable AGM Battery Trickle Charger… was still “Trickling” well enough to Start The Truck.

Yup… Half-a-Turn on the Ignition Key and She Fired Right Up; albeit... with a Little Hitch in Her Git-Along; just a minor stumble mind you, and so my thinking was that since she sits motionless now almost as much as her Owner does (She’s Pushing 22 now and I’m not quite 'Pushing Up Daisies' or taking a 'Dirt Nap' just yet while heading towards 73) it was probably just due to a common lack of “exercise’...you might say.

Likewise, I wanted to take a look under the Hood and see What was What...just in case any “Vermin” have been taking advantage of us BOTH during the Long Night of Covid and Snacking on the Engine Harnesses. So I raised the already un-locked Hood due to the running of the Extension Cord to the Re-Fresher-Trickle Charger laying about on and near the Motor, and flipped the switch of my AAA Battery Head Lamp and cast my eyes around looking for trouble. No amount of scrutiny will EVER efface the Terrible Beauty of that LS (LM7) Motor. :>)

“Hmmm…” I thought… “Nothing looks Chewed on or a reason for anything being A”Miss” under here…” And then suddenly I had the Deep Fried Poo Scared Right The Hell Out of me when the G-D’d Hood Light suddenly came ON and just as the Engine was beginning to idle away pretty damned good. I didn’t think much about it at the time, but upon closer inspection, I found the Power Connector was easily loosened and removed from that Damned Hood Lamp.

Being suspicious about whether or not “Refrigerator Lights Stay On After You Close The Door…” I reached up and un-tabbed it from the under-hood latch lock holes and took it back into house after I let the Big Blue Machine Idle for a while longer and warm the Coolant to around 180-200 Degrees. Then, after shutting off the headlights and watching the Voltage Meter level drop a little bit, finishing off this Episode with a Charged Battery… I was anxious get back inside and examine that Hood Light because I could feel and hear something heavy … Rattling Around Inside of it.

For the half hour or so that followed on, thinking that the Light was Broken, I tried my Damnedest to Split apart the casing (Halves…?) on that Light with no success, short of me doing it harm with the one Tool I own that Makes EVERYTHING Look Like a Nail… My 4 Lb Sledge Hammer.

But a Cooler Head prevailed upon me to Watch THIS Video and re-examine that Old Adage that “There really is NOTHING NEW Under the Sun…” Because sometimes… There really IS!


After a failed effort to find an OEM Replacement on Amazon, I ventured over to eBay and bought THIS replacement GM OEM Under Hood Light for around $30.00 because I'm STILL in the Honeymoon Phase of having bought my Y2K Truck...and I DO pamper her whenever I can: 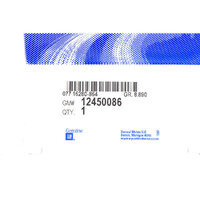 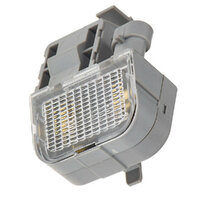 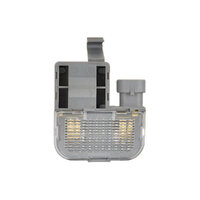 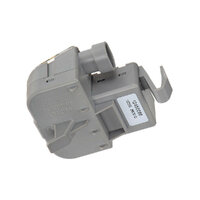 It's funny though, when you Think about it... Of ALL the Four Natural Forces that govern EVERYTHING in the entire Universe; IE (The Strong Nuclear Force, The Weak Nuclear Force, The Electro-Magnetic Force, The Force of Gravity)... Gravity is the ONLY One that ONLY moves in One Direction. Under its influence, the Earth constantly accelerates EVERYTHING towards its Center at the Rate of 9.81 Meters per second/per second.

So the GM Engineers that Fiddled with and Figured Out How to Design this Clever "Gravity Switch" DO deserve some 'Props' ...for a change... since as long as the the Bulb does NOT Burn Out and the Electrical Contacts remain Clean...This Elegant Lamp will ALWAYS either Turn OFF or ON as long as Gravity WORKS. THAT is Pretty Damned Cool!
Last edited: Jan 9, 2022
Toggle signature
"Chance Favors The Prepared Mind..." Dr. Louis Pasteur
"De Mortuis GMT-360... Nil Nisi Bonum..." (NEVER Speak Ill... of a Dead GMT-360)
M

It's not that great a system - sometimes I have to smack my aged unit to get it to work. I might replace the mechanism with a mercury switch.
I removed the bulb and connected a led strip. I found that under a very low load of 20ma the BCM drops the voltage to 10.5v. Pop the regular bulb in and it goes back to 12.5 and maintains it until the next power cycle. Strange behavior - It probably will be necessary to change the power wire so it's not BCM controlled to get full brightness of the LEDs. The LED strip really lights up the engine nicely - far better than the single power hungry bulb.
OP

Howdy, long time no see. Kinda crazy I found this same day as I have all notifications turned off from post wars back in the day lol. Just felt like getting on here and poking around and saw the notification.

Anywho, I bet the fella that designed that is super proud of himself. But it has a terrible low pressure contact switch undoubtedly being used regularly on an old chevys hood. Some folks are popping the hood every day on these old beasts topping off fluids. Only a matter of time before the contacts foul up as witnessed in the video.

I wonder if a standard mercury tilt switch can't carry the current of the incandescent bulb? Or maybe they didn't use one due to mercury fears. Either way, I don't have an underhood light on my 03, GM threw out a bunch of the little extras like that after the bankruptcy. Cabin air filter, foot well lights, various other things omitted just like what's seen on the 02 vs 03 360's.
Reactions: Mooseman, xavierny25 and MRRSM
OP

Welcome Back, Brother! Great to know that You are OKAY!

You'd think that in a similar manner in the way highly electrically conductive Old Mercury Switches were used in Home Thermostats, they'd have become all the rage for this same application, But not in the case of automotive applications due to this Liquid Heavy Metal's absurdly high level of biological neuron and brain tissue toxicity in humans and animals in even the tiniest amounts.

Then there would be its natural tendency to bounce around whenever being subjected to the slightest vibrations; even adjacent properly idling engines. They would all also make poor candidates for this application considering the possibility of having Shattered Glass Vials of Mercury getting scattered all over engine bays during motor vehicle collisions as another prohibition for its use.

Even just the Angular Momentum imparted from making regular left and right turns and starts and stops would also cycle this Liquid Metal Light Switch On and Off from sloshing around too much....or even when parked on any steep incline could become a factor in depleting vehicle batteries.

What was missing here was a Metri-Pack Weather Seal present between its halves to keep out all the Under Hood Dirt so evident inside of the Lamp showing in the VOP's Video. Here is ANOTHER Video showing the device "In Situ" and In Action that illustrates another VOP's access and Bulb Swap; similar to what @Mektek has suggested with using an LED Replacement Bulb :

Mounce said:
Kinda crazy I found this same day as I have all notifications turned off from post wars back in the day lol.
Click to expand...

For the longest time now, we've had nothing but peace and harmony here. Haven't seen any flames in the longest time and any discord is quickly doused. Welcome back bro.
Toggle signature
Need GMT360/370 Service Manuals? Get them Here!
Need Full Size Truck Service Manuals? Get them Here!
FAQ Threads
'02 TB EXT 4.2L '06 Saab 9-7x 5.3L '07 TB LS 4.2L '11 Caprice PPV 6.0L '08 Avalanche LTZ 6.0L 2021 Sierra Elevation 3.0L Duramax
This site is funded by you! If you have saved some money from help you received, please consider becoming a supporter or donating. All proceeds go to supporting the site. Thank you!

How do you expect a sheepdog to protect the sheep if the farmer and the sheep keep kicking it - me
Reactions: christo829, MRRSM and Mounce
OP

Totally agree with this approach ... In such situations (For us NON-Mods & NON-Admins) It's always best to follow the Japanese Principle of:

To save anyone else time to translate from above...

per wikipedia:
Mokusatsu (黙殺) is a Japanese word meaning "ignore", "take no notice of" or "treat with silent contempt"

en.wikipedia.org
Good history lesson also about the ending of WW11 when the Japanese used this word and it was translated improperly! This would have made a good Paul Harvery (rip) "Rest of the Story" story.
Last edited: Jan 9, 2022
Reactions: MRRSM, Mooseman and northcreek
OP

The NSA De-Classified Essay on this Word "Mokusatsu" linked below was penned by a 'concealed author' as an Object Lesson to their Analysts to realize that quite often... there are no perfect exchanges of meaning between languages that will convey an identical truth in understanding of each other after translations.

The technique of applying "Mokusatsu" means different things in different situations in the Japanese Culture, depending upon WHO is using it and to WHOM the intended 'audience' is meant to be.

This subtlety in understanding about what the Japanese Prime Minister, Kantaro Suzuki actually meant to say in his 'cute reply' to our stern demands for an "Unconditional Surrender" from Japan back in 1945 caused President Harry S. Truman to finally authorize dropping two Atomic Bombs on the Japanese People, vaporizing them with the Heat of the surface of the Sun.

He was trying to spare the lives of the estimated 1,000,000 casualties expected that our Armed Forces would probably have suffered from making a direct assault upon the main Islands of Japan, something never before attempted in history of the World.

The clandestine "Spooks" working at the NSA must always take into consideration the cultural differences between Americans and the rest of the world that might lead to misunderstandings with the unintended consequences being Destroying All Life on The Earth.

For our purposes here though, it translates to mean Starving Trolls to Death ...by simply NOT Feeding them. The HARD PART of using "Mokusatsu" though... is knowing that the Trolls will ALWAYS have "The Last Word".

MRRSM said:
What was missing here was a Metri-Pack Weather Seal present between its halves to keep out all the Under Hood Dirt so evident inside of the Lamp showing in the VOP's Video. Here is ANOTHER Video showing the device "In Situ" and In Action that illustrates another VOP's access and Bulb Swap; similar to what @Mektek has suggested with using an LED Replacement Bulb :

Judging by the size of the heatsink on the back of the LED light it probably has a load resistor built in. This fixes the problem of the voltage drop from the BCM, but reduces the advantage of low power consumption the LED would bring.

Instead of the OEM setup, or a mercury switch, it would be simple and cheap to have a pin switch on the hood to activate the light when the hood is opened. Those switches are in use with all the doors and are very reliable.
Reactions: christo829
You must log in or register to reply here.