My dad is having some issues with his truck, and trying to gauge what the best way to tackle this is. The truck has 112k miles and is an 06 Yukon SLT with the 5.3. We recently just finished work on it about 2 weeks ago. The water pump (bad coolant leak) went out so we replaced that, all the belts, and thermostat. Everything appeared to be fine, while bleeding the system we accidentally left the vent open on top of the engine so coolant was rushing out on the head while filling the system up. My dad poured rinsed the engine bay out and sprayed a bit under the intake plenum to get the coolant out from there. This was about two weeks ago we did the work, fast forward to Christmas day we're driving home and the CEL comes on. Connected the OBD reader and it reads 2 codes, but we can only view the first one which is a P0332 - "Knock Sensor 2 Circuit Low Input (Bank 2)." The truck still appears to have power, but has a very slight miss at idle. We didn't have torque open to monitor it, but just having the hood open and leaning into the engine bay you can feel when it misses.

I take it that some of the water found its way into the knock sensor and probably shorted/killed it? We did clear the code and drove it around locally and it was fine, then when I took it out onto the highway not even 10 mins in and the CEL came on with the same code. The job doesn't seem too bad, aside from moving all the wiring out of the way and cleaning the surfaces for the new gaskets. Is there anything we should watch out, or replace while in there? We intend to do the wiring harnesses and both sensors.
05 Envoy Denali, 5.3 L V8, 3.73 Gears w/G80, 191K miles, PCM of NC Tune
*FORMER* 05 Avalanche Z71, 5.3 L V8, K&N Air Filter, PCM of NC Tune, 3.42 Gears w/G80. 102k miles. (Frame cancer)

Yup. I'd say y'all flooded the sensors. Common failure for them. When you go to do them use only acdelco for the sensors and make sure someone local has the harness in stock in case it breaks. Also search up the knock sensor tsb and do accordingly to prevent the same from happening again. Trick is to build an rtv dam around the grommet to keep water (coolant in your case) from just flowing right over it and subsequently leaking down to the sensors and allow a spot to the back for possible water to flow out if it makes it over the dam. 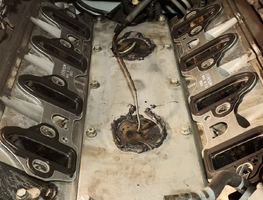 Also as far as I know these engines don't have a dedicated purge spot. I'm assuming y'all used the steam pipe/coolant crossover for this? Good idea to replace the gaskets, two on each head, on at the front and one at the back. The gaskets are cheap and I've seen a few leak so it was worth it to me while I had the intake off.

PS, my experience is based on a 03 5.3 Silverado. ALSO a great time to do the valley cover gasket while you're in there. Very common for leaking oil everywhere along with the valve cover gaskets which I still need to do. I used felpro gaskets for the intake and valley cover.
2004 Trailblazer EXT LS
2003 Silverado Z71 LT
OP
OP

@Mounce Thanks Mounce! Yeah we had the steam pipe/coolant crossover lose, we thought that was the way you were supposed to purge air from the system. Then after a quick search, we found out the process is different from the 5.3 in my truck and had it done in half the time. We're definitely swapping out the harnesses and gaskets, might as well do the job correctly the first time.

We do plan on doing the valley cover gaskets, luckily we just need one pair of valve cover gaskets. The driver side valve cover was replaced a few months ago with the redesigned PCV, hoping this solves the oil burning and occasional smoke on start up. After watching videos on taking the intake off, it doesn't seem like much was changed over 03 to 06.
05 Envoy Denali, 5.3 L V8, 3.73 Gears w/G80, 191K miles, PCM of NC Tune
*FORMER* 05 Avalanche Z71, 5.3 L V8, K&N Air Filter, PCM of NC Tune, 3.42 Gears w/G80. 102k miles. (Frame cancer)

Yeah it's a relatively easy job. Only three things fought me. Injector connectors were hard to release, I actually manually released them from the inside with a pick as the purpose made tab WOULDN'T RELEASE any of them (which they have changed over the years, yours may be different). Knock sensor/harness connectors, I never figured them out and thusly both of the old knock sensors broke during unplugging them, no big deal. Lastly the valley cover was a bear to get off, the knock sensor tube seals were frozen to the sensor posts and finally tore when it came loose. Gasket has a wire ring around the post and had to be cut for removal. So, make sure your valley cover gasket set includes the tube seals.
2004 Trailblazer EXT LS
2003 Silverado Z71 LT
OP
OP

Sorry, don't mean to bump my old thread here, but everything turned out great!

Thanks @Mounce. We managed to finish the job over the weekend. Wasn't too bad honestly, the injectors pretty much fought us tooth and nail but we got them to release. The rear knock sensor was indeed the cause. It was completely rusted and the wiring harness leading to it broke as we pulled it out. Front wasn't too bad, but that was replaced too and made a small damn as you suggested to prevent water from seeping around the sensors. We made sure to order every single thing we needed before tearing into it. I guess we got lucky, the valley cover gasket wasn't that terrible to get off. We got it all bundled up, cleared the codes and gave it a good drive and it seems to be running much more smoothly now. Pick up is a tiny bit better as well.