SOLVED! How to Install a 1/2 Ton Swing Hydraulic Hoist onto a Silverado 8' Truck Bed

Lifetime VIP Supporter
In very short order… I need to move Short Block Chevrolet 350 CID Engine Block and many other similarly heavy objects that ordinarily would be a 'Walk in the Park' to load up using my HF 2 Ton Orange Hydraulic Engine Hoist from the Driveway up to the Bed of my Chevrolet Silverado Pick Up Truck. However, the drop off location is NOT equipped with a similar Hydraulic Hoist to lift and unloading the Engine Block by hand off of the rear of the Truck Bed and carrying it across a Grass Field and into a Large Quonset Hut Garage would be next to impossible. And so I am quickly investigating whether or not this Hydraulic Lift Design will work on the bed of my Truck… or if there is a Better Option available to choose from in order to solve this problem… ASAP.

I have a goodly size section of 1/2” Phosphor Coated Industrial Plate Steel and some lengths of Square Stock Steel that I can, measure, cut and drill out and MIG Weld if it becomes necessary to fabricate something that will keep from having the Lift Support Base once mounted on top of the Tin Truck Bed from ripping the bolts through the 'Thin Tin" at the tiny, four point mounting plate and tipping completely over.

If anyone has done this on their Silverado. I’d strictly like to know how you did yours and whether or not your installation was sufficiently strong enough to withstand the stress of picking up a fully dressed engine or something comparable to at least 500 Lbs. Also ...While these Three YT Videos DO show the various installation support methods attempted by the VOPs (Video Original Posters) ... getting some input from our GMTN Members who possess real practical experiences with actual installations of this Rig-Device… along with any good, practical suggestions ...would be most appreciated.

Thanks in Advance, Brothers.

Another thought would be to rent a truck with a "power lift" on the back. I wonder if Ryder or the like rent a service truck with a lift gate on the back. If the distances you travel between aren't to long it may the the cheapest way to motor the block. And much less problem than trying to mount the lift in the corner of the truck bed without the frame nearby to give extra strength where you need it.
OP
OP

Lifetime VIP Supporter
While making calculations for the “Distribution Forces and Stress of any Boom Loading Device” is absolutely the most bewildering mathematical problem to consider due to it containing such a wide array of Variables that are not to be believed.... I should be able to solve this problem now that I have viewed all three videos carefully ... But without having to rely one bit on what is covered in this White Paper on this serious topic for Industrial Engineers. I will be using what I have learned empirically and from hitting the books while in the USCG on the subject of hanging Rotor Blades on Helicopters. It all Boils Down to THIS:

At the the Bolt On Four Point Base…. As the surrounding Area of Support adjacent to the Base Increases in Size and Strength via Increased Thickness… the Amount of the Pressure from the Bending Moment of the Load per square inch Decreases. In effect… this literally spreads the weight outwards and over whatever the chosen area size (LXW) of that 1/2” Thick Phosphor Coated Steel Plate turns out to be. The paper is still worth scanning to get a Bird’s Eye View of what Engineers have to contend with when sorting out these problems:

Within reason…. The Dude in the First Video has the Right Idea in my opinion by solving the Support Problem from ABOVE ...rather than from Below where the sketchy Truck Bed and Chintzy Frame Thickness reside. But I also think that he should have chosen a Thicker Steel Substrate for that Plate and perhaps extended that Area of that Rectangle a bit Wider... because the Adjustable Angle Boom can swing through its Axis with an Arc of 360 Degrees.

The other thing that is important to mention is that the area directly underneath that Plate will suffer from less bending and flexing because the Upper Plate will be solidly Bolted Down at the Base of the Swing Boom... forcing the stress of the Lifting Moment to have to deal with that Thick Plate before it even gets the chance to have any effect upon the “Thinner Tin” sandwiched underneath.

The only other thing he could have done to make his work better would have been to cut some additional 4” Square Drilled Out “Washer Plates” to slip over the Threaded Bolt Shanks ahead of slipping on the Washers and Threading Down the Nuts to tighten down everything from underneath the Bed. This would offer the “Tin in Between” an even greater chance to spread out the forces from the variable loads being exerted through what really should be 'Grade 8' Fasteners/Wide Steel Washers.

So I am probably going to go with “Door #1” for the solution. Thanks for your suggestion @Redbeard … but I would rather take a Turkish Bath with my Dead Mother than go through the hassle and expense of dealing with Renting ANYTHING if I can avoid doing so. I’m moving this Automotive Gear as a favor to the Elderly Camaro Buyer’s Grandson… and besides… with all things considered…. If I do this right… I can enjoy having that thing ‘hanging around’ as needed ...should I ever encounter issues with 'Heavy Cargo' in the Future. :>)
Last edited: Oct 4, 2018
"Chance Favors The Prepared Mind..." Dr. Louis Pasteur
"De Mortuis GMT-360... Nil Nisi Bonum..." (NEVER Speak Ill... of a Dead GMT-360)
OP
OP

Lifetime VIP Supporter
Okay... Thanks to the situation presently facing @Uncleenvoy on a isolated problem requiring much "Mechanical Advantage"... it lead me to accidentally find a solution to THIS UNSOLVED THREAD that will "Kill Two Birds with ONE Stone". After watching the Linked Video on the Assembly and Use of the MAXXHAUL Tri-Pod 1,000 Pound Swivel Jib Crane...I checked over on Amazon and found them available for $260.00 with Free S&H.


Buyer-User Hands On Demo-Setup and Review on a Chevy Z-71:


This Device works well because it Connects One of the Three Tri-Pod Legs to the Trailer Hitch on ANY Pick Up Truck so that Very Heavy Cargo can be Lifted Up and then Swung aboard the Truck Bed. There are TWO Best Parts about this Design:

(1) It requires NO Modifications...either Temporary or Permanent to the Truck(s).
(2) I can assemble the device and modify its Tri-Pod arrangement to work at other locations in my yard. I need it to elevate some VERY Heavy pieces of Cast Iron Equipment and place them onto my Gorilla Cart for easier Transport to different locations on my property. Up until today, I have been unable to think of any other way of doing this task. 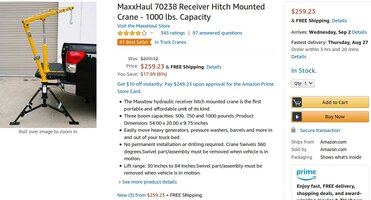 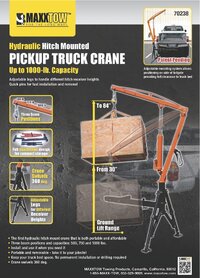 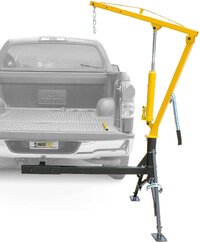 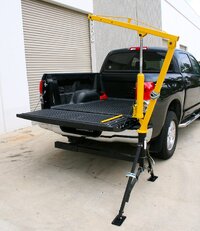 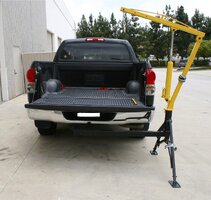 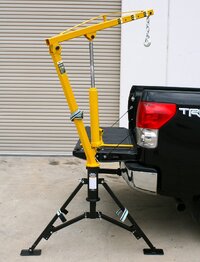 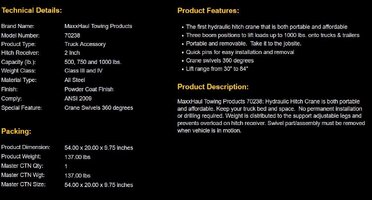 I've been racking my brain recently about the second problem and THIS Device will be the PERFECT Solution. Originally, I had even considered dragging around my 2.5 Ton HF Orange Beast of a Lift into the knotty, grassy Back Yard to do this difficult task ...and obviously saw how terribly impractical that idea would have been. THIS MAXXHAUL Portable Tri-Pod Jib Hoist-Lift solves BOTH issues ...and I am very glad for it. And so... The Problem is...

If you were wondering "How Will You Manage to Get the "Third" Leg of the Tri-Pod to Work ...when it will NOT be Connected to the Truck Trailer Tang?"

Not to worry... The Long Frame acting as the Third Leg Insert that Fits inside of the "T" Connector is PERFECTLY SQUARE. So all I'll need to do is:

ROTATE THE "T" 90 DEGREES SO THE LONG POST POINTS TOWARDS THE GROUND ...AND THEN PLUG IN THE LONG SQUARE PIPE RIGHT INTO THE "T" CROSS PIECE.

As Long at the Weight being Hoisted is situated between the Two Actual Tri-Pod Legs and biased close by to the Extended Square Tube... it will NOT Tip Over... :>) 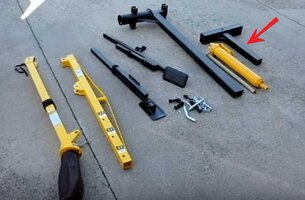 Lifetime VIP Supporter
Just a few more "Finishing Touches" that will benefit others intent on obtaining this 'Cool Hoist Rig':

(1) If you have anything like a Gorilla Yard Utility Trailer you can use to transfer Heavy Things onto from the Truck Bed... Try swapping out the Pneumatic Tires that must CONSTANTLY be checked for proper Inflation... for these No-Flat Style Tires:

(2) If you have a Riding Lawn Mower and it is NOT equipped with a Towing Bracket & Ball... THIS Universal Set Up will provide the right attachment Hardware: 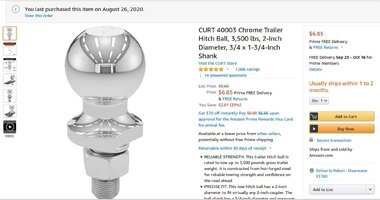 (3) If you have anything like the Gorilla Yard Utility Trailer and want to use the Riding Lawnmower or Mini-Tractor to tow it around... the Company does NOT have their own Optional Trailer Tongue Hardware. However... THIS Gear will work as an alternative:

(4) And finally... If you want to simplify the Harnessing Arrangements... having all of THIS Gear behind the Passenger Seat will certainly come in handy when the times come for using the MAXXHAUL Tri-Pod Hydraulic Lift: 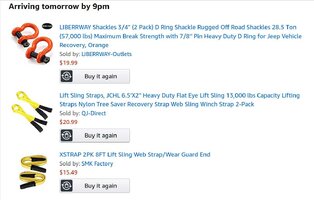