I noticed that I have no 4x4 while on a snowmobiling trip. Drove up to northern NH in a snow storm, and made it just fine. I drove on some snowy roads with the selector knob on "AUTO" for most of the trip. Shortly into the trip, the "Service Stabiltrak" message and light came on. This has happened to me in the past, but I chalked it up to road grime / rocks/ ice gumming up the wheel sensor rather than there being an issue with the vehicle. That had been the case in the past for the many years I've owned this TB. This time, it stayed on, and it immediately came back on after making a stop for fuel and then getting back on the road.

I parked at the bottom of a snow, icy hill when I reached my cabin in NH.. When I attempted to leave later that night, I found myself stuck.
I put the truck in 4HI, but only the rear wheels would spin. Next, I tried 4LO, same thing. There was nothing I could do to get the front wheels to spin. The lights on my selector knob are functioning properly. I was able to get into 4LO and could feel the rear wheels spinning in low gear, but not the front. Eventually, I called AAA to winch me up the hill.

For the rest of the trip, I left the selector knob in the AUTO position, and the "Service Stabiltrak" light / message appears when navigating a turn into a gas station with some ice patches on the road.

When I returned home, I tried some diagnosis. I successfully shifted into 4HI and 4LO, then drove up and down my cul-de-sac. While cutting the wheel to turn around at the end of my cul-de-sac, there was no "skipping" of wheels, so I know that 4x4 was not engaged even though the rear wheels did shift to low gear while in 4LO - again, front wheels won't spin.

In my garage, I hear the distinct 2 noises when shifting from 2HI to 4HI. So, I'm ruling out the actuator and the transfer case encoder motor. Since the lights on my selector switch function properly, I'm ruling out a switch problem.

Next I jack up the front left side of my TB, turn the the ignition to ON without starting it, then shift from 2HI to 4HI. Again, I hear the 2 distinct "whirring" noises. Next, I am able to freely rotate the front left wheel. HOWEVER, the front drive shaft does not move while I rotate the wheel.

The TB drives perfectly (except for no 4wd), with no "clunking" noises from the front end. In fact, there was nothing the screamed to me a 4x4 issue until I found myself stuck trying to come up an icy hill. Perhaps the Stabiltrak light / message was something other than an errant piece of road debris stuck in the sensor? Now, I'm wondering what I can do further pinpoint the problem.... I'm hoping that it's not a transfer case failure. I would think there'd be some drivability issues or some troubling noises coming from the front end? Perhaps the fork pin that has been known to break in these vehicles? TIA for any help!!

Stabilitrak is unrelated and likely the Steering Wheel Position Sensor that clears itself at the next restart or if you turn the key to START. Usually acts up in the cold.
Need GMT360/370 Service Manuals? Get them Here!
Need Full Size Truck Service Manuals? Get them Here!
FAQ Threads
'02 TB EXT 4.2L '06 Saab 9-7x 5.3L '07 TB LS 4.2L '11 Caprice PPV 6.0L '08 Avalanche LTZ 6.0L 2021 Sierra Elevation 3.0L Duramax
This site is funded by you! If you have saved some money from help you received, please consider becoming a supporter or donating. All proceeds go to supporting the site. Thank you!

I agree with Mooseman, the disconnect has likely failed in one way or another.
S

Thread Starter
Thanks for the replies! Passenger side only wheel spins freely in 4HI. I have the entire front end up now, will pull the actuator out and see what it does when I switch from 2H to 4H. Fingers crossed it’s a mechanical failure in the actuator. I know the front axle disconnect assembly will be an expensive fix if that’s the problem.

99% on the disconnect. But you can easily take off the actuator by removing the two small screws. Leave it connected to the harness, let it hang and try the switching from 2WD to 4WD that Mooseman is recommending. That will allow you to rule out the actuator.

Also while you are in there.... Grab the CV shaft where it comes out from the disconnect and see how much you can move it up & down. The grease in the actuator dries out and then the bearings fail and that CV shaft starts to wobble around.
S

Thread Starter
Just got done with the actuator, and it’s working just fine. It moves in and out when I have someone turn the selector knob. Looks like a front axle disconnect repair is in my future. No play whatsoever with the CV shaft though.

Good on the tight CV axle. Did you try pushing in where the actuator does to see if you could engage the disconnect? When my disconnect failed there was a thrust washer that had slipped out of place and prevented the movent of the shift fork. Since my actuator plunger was spring loaded the actuator motor travelled properly but all it did was compress the spring since my fork was immovable.
S

TJBaker57 said:
Good on the tight CV axle. Did you try pushing in where the actuator does to see if you could engage the disconnect? When my disconnect failed there was a thrust washer that had slipped out of place and prevented the movent of the shift fork. Since my actuator plunger was spring loaded the actuator motor travelled properly but all it did was compress the spring since my fork was immovable.
Click to expand...

I’ll have to check for a situation like that. Were you able to get that washer out without too much effort (needle nose pliers)? Researching the disconnect assembly schematics now to see how far I can go on my own with jackstands on my garage floor. Had a hell of a time getting my hand in to get the actuator as it is.

It can be done with a.good set of jackstands and a good assortment of tools but be aware that a lot of the right front wheel stuff has to come out or at least partially come out. I replaced my front axle disconnect entirely. Only discovered that washer during a full disassembly of the old disconnect. 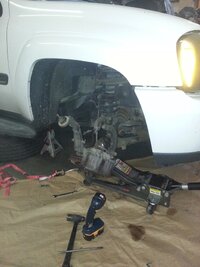 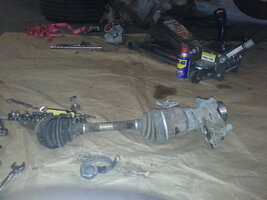 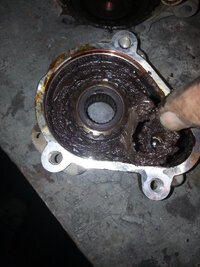 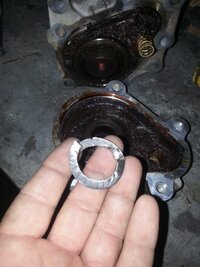 TJBaker57 said:
It can be done with a.good set of jackstands and a good assortment of tools but be aware that a lot of the right front wheel stuff has to come out or at least partially come out. I replaced my front axle disconnect entirely. Only discovered that washer during a full disassembly of the old disconnect.

Looks like a lot of wenching to get the disconnect assembly out. Thanks for posting the pictures, very helpful. I think this would be doable for me with the tools that I have. When I pulled the actuator, I did notice no dried up grease, but it was a dark charcoal color. I have to assume that regardless of what failed within the disconnect, there is heavy wear all around. So, I’m leaning toward replaying the whole assembly instead of trying to rebuild. What replacement part did you use? I found this Dorman part with a forged shifter fork. Not cheap, but looks like it would last. 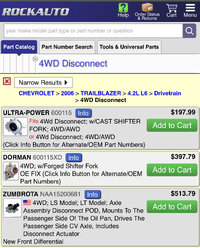 TJBaker57 said:
It can be done with a.good set of jackstands and a good assortment of tools but be aware that a lot of the right front wheel stuff has to come out or at least partially come out. I replaced my front axle disconnect entirely. Only discovered that washer during a full disassembly of the old disconnect.

Silver Supporter
Look on Ebay for US Powertrain. It's an upgraded new one for a good price. I've had one on my 02 for 3 or 4 years and it's not let me down.
American as apple pie...but still as Aussie as a meat pie!

It is a tough call without taking the disconnect apart and seeing what is inside. In my case, only the shift fork was broken, so I just replaced that. But I had to wait three days for the part to come. And it was a lot of work, since I cleaned the entire case and components in a parts washer, repacked with grease, and reassembled.

I did it over Christmas holidays, so I didn't mind the time it took, and of course I saved some money. But you have to balance that with the ease of getting an entire assembly.

There is one more caution to be aware of... The disconnect has been known to get seriously stuck to the oil pan. People have broken their disconnect and also in rare cases broken their oil pan trying to get the two apart. Patience is essential along with the proper use of just enough force.

Moderator
If it is stuck, do not try to pry beyond moderate force or it WILL break in the pan as seen a few times here.

Hard to Remove Front Disconnect Assembly, 2005 Envoy, Part 1 This is the story of how I fixed my 4WD. I have included mistakes, durations, true costs and suggest improved procedures for future jobs. We learn from everything, and I hope you may gain from my mistakes. My 2005 GMC Envoy...

If it won't come out, try to turn it in the pan, hitting it up and down with a hammer, after using a lot of penetrating fluid. I also remembered this video where he used a slide hammer after removing the engine.

Video is teed up to the relevant info:

I installed this one a few years ago. Working fine. Price has dropped about $50 since I bought it too.