Can I install an aftermarket radio in a 2002 Silverado without doing any BCM crap?

I've put off doing anything with the radio for a while because I was afraid it would require me to go let the dealer bend me over to do some BCM programming crap, but the radio has seen better days and I'm to the point I need to get something else... just trying to find out if I can buy any radio that fits and wire it in or not.

Sure you can. Never heard of anything required as far as the BCM is concerned except if you try to use another OEM radio, then the VIN has to be programmed in. But for the trouble, get an aftermarket radio and use an adapter with it. I like the ones from PAC Audio. Only big determination is if you have Bose or not. OnStar you can ignore since it doesn't work anyway. You'll also need an antenna adapter.
Toggle signature
Need GMT360/370 Service Manuals? Get them Here!
Need Full Size Truck Service Manuals? Get them Here!
FAQ Threads
'02 TB EXT 4.2L '06 Saab 9-7x 5.3L '07 TB LS 4.2L '11 Caprice PPV 6.0L '08 Avalanche LTZ 6.0L 2021 Sierra Elevation 3.0L Duramax
This site is funded by you! If you have saved some money from help you received, please consider becoming a supporter or donating. All proceeds go to supporting the site. Thank you!

It is always cheaper to do the job right the first time.
T

Mooseman said:
Sure you can. Never heard of anything required as far as the BCM is concerned except if you try to use another OEM radio, then the VIN has to be programmed in. But for the trouble, get an aftermarket radio and use an adapter with it. I like the ones from PAC Audio. Only big determination is if you have Bose or not. OnStar you can ignore since it doesn't work anyway. You'll also need an antenna adapter.
Click to expand...

Thanks for the info. I had just heard so many stories of the damned BCM controlling everything that I was afraid to mess with anything. And nope, no Bose in the truck... sadly I had a Bose system in my car and when it went tits up it was a pain in the butt to deal with as it didn't even have normal speakers...had to replace everything unless I was willing to pay for a replacement Bose radio that was way overpriced.
J

One of the best companies for aftermarket stereo is Crutchfield. They already know exactly what kinds of options you have in terms of swapping it out, know what adapters/install kits are needed, and have exceptional tech support.

The OEM radio does communicate on the CANBus (to report its S/N, allow RAP, etc.,) but it can be replaced with an aftermarket unit. I like the Metra / Axxess components, but whichever harness you use, as long as you use one, you won't have to cut one wire in the factory harness, and the CANBus will think it has the factory radio still installed. No muss / no fuss.

When I looked up the 2002 Silverado on Metra's site, it looks like it uses the simpler harnesses and doesn't need a 'chime box' (later models use the radio to play the chime tones for 'door open', 'low fuel', etc., etc.) So that's even easier. And IIRC, steering wheel control buttons didn't appear until 2003, so that's another thing you won't need.

Being a 2002, you may (?) not even have a CANBus to worry about. But I always recommend the aftermarket harnesses; they just make things so much easier. Wire the leads to the appropriate outputs on your aftermarket radio harness inside the house where it's nice and cozy, then take it out to the truck, unbolt / unplug the OEM, plug the aftermarket harness into the factory plugs, and... 'done'. This also allows you to easily retrofit the OEM radio back (e.g.; if you sell the truck, and want to keep your aftermarket radio).

I think the 2002s still use the older Delco 'DIN and a half' radio (has the square-ish LED display in the upper RH corner) -- so if you get a replacement radio that is a 'double DIN' size, you may have to do some minor dash surgery. But the aftermarket has install kits to make it less painful. For the 2003-up trucks, since they have the double DIN opening, the kits aren't much more than two plastic side brackets and a front trim ring.

Here's a sample of what the older Delco Electronics radios look like, for reference (from what I see on Google, GM may have used a mix of old / new radios in 2002 Silverados, depending on trim level -?) Either that, or they don't have the interior images correctly organized by year. 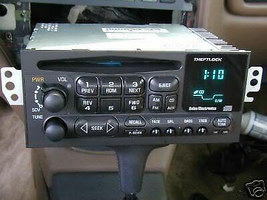 Sites like Crutchfield can advise what type of radio fits in your dash (and you don't have to buy anything from them to get that info, nor are they the only ones in the world that sell the install equipment). Their customer support used to be better than what it is now, but if you like to have good guidance on how to install things, they're still good with that (although they'll now try and upsell prewired harnesses, etc., for people who don't know how to use a wire stripper / terminal crimper... LOL) Their prices on things are a little higher, as a result.

Do make sure to get the GM antenna adapter, as Moose mentioned -- GM uses mini-sized antenna plug leads, which makes them an oddball, compared to aftermarket. The adapter makes it plug/play.
Toggle signature
'03 Envoy XL 5.3 w/ 3.73; '03 Sierra 1500HD Quadrasteer w/ 4.10 & Traction Ctrl (1 of 237 made)
Did you get an issue resolved, your GMT back on the road, or save

by using this site? Consider purchasing a supporting membership - if you saved a trip to a dealership / garage, you're already money ahead! ALL proceeds go ONLY to maintaining the website.
Tech2 owner, covering N. IL / S. WI areas.
"Good judgement comes from experience. Experience comes from bad judgement."
You must log in or register to reply here.
Share:
Facebook Reddit Pinterest Tumblr WhatsApp Email Share Link