Lifetime VIP Supporter
In the attached video... the VOP explains an uncommon experience that happens from time to time...when an Ordinary Person... becomes Super-Humanly STRONG to take action during a Life and Death Situation. But what happens when you are faced with Life and Death situations...EVERY WORKING DAY? We all have some common experiences that may rival the opening story in that first Video... but here is my own:

Superheroes… Not unique in the World as believed to be an Idea Born of The Modern Era… Ever hear of or read about “The Epic of Gilgamesh”...and of course that is also a story about his ‘Half-Man Half-Animal Sidekick’… Enkidu? That story dates back to the Ancient Periods in Mesopotamia. How about “Saga Siglar”…? Now this involves stories from where my people came directly from. Norwegian and Scandinavian Folklore about The Norse Gods of Odin, Thor, Loki and Frikka. These were all stories that were told innumerable times around countless Campfires, with all of the Kith and Kin sitting about; especially told for all those amazingly Wide Eyed Kids… All Fascinated by the possibility ...Yes...and even The Necessity of One Day… Becoming Superhuman.

My life changed around the time that I was 12 or so...when I got my hands on my first (12) Cents Edition #1 of Marvel Comics “Spiderman”. Now HERE was someone I could relate to…Peter Parker... a Skinny Kid just like I was… Smart, but badly flawed and very much in need of something psychological to grasp onto as an Idea Larger than Himself and possessed of the desire to reach for that possibility. These might seem like very silly ideas for an Old Man to discuss, but my entire adult life was imbued with these notion that sometimes… in order just to survive… Thinking like a Superhero could actually inspire you to behave like one in the Real World.

I was very lucky and very privileged in so many respects to have been selected and able to work in two main pursuits where the threat of Danger and Death was an everyday occurrence. In both of these realms… I was surrounded by the Mythologies that accompany taking Sworn Oaths in front of Judges to stress the moral and ethical seriousness in performing these jobs, and then being allowed to don the Uniforms of both professions: The United States Coast Guard performing SAR Helicopter Search and Rescue … and later… as a Sworn Uniformed Police Officer (later detective) for 25 Years until I finally retired. But the Symbols of Power and Prestige in those fields required much more than the ‘mere veneer’ or ‘the verisimilitude’ that Actors Play on Television when the don the Cap, The Badge and The Gun. As both a U. S. Coast Guard Helicopter Aviator and … as your Average Street Cop… I very well knew that during each and every work day, I could lose my life in the line of duty.

So the point here is that sometimes, one will need something more than the mere appearance of ability. “...‘Neath The Skin...” as they say, it was wise to ALWAYS BE FIT, STRONG AND CAPABLE in order to literally ‘Be Ready for Anything...’. During my career… the average Cop got HEAVIER; not necessarily due to sitting too much for long hours in Beat Patrol Cars while drinking Coffee and Eating Donuts incessantly… but rather from having to wear Heavy Body Armour and MORE and heavier GEAR on the Utility Belts around our wastes. Add to all of that paraphernalia of the Combat Boots when I was a K-9 Officer and the gear in support of my 4 legged partner...and by the end of each shift… we were soaking wet with the sweat from sincere effort to have to carry all of that gear...plus our own weight, night after night on The Street. So being Fit and Strong... was an absolute necessity.

I came to realize that the Fitness of a man’s body was only Half the Battle of being able to, “Turn In my A** the way it was issued to me...With ONE Hole in It!” … and that was how you thought about your work and your Mental Strength when doing so. So for me, leaning on the heroic idea that striving ...not for perfection… but for the necessity for Superhuman Strength and Courage that was tested each and every day you were on the Street, THINKING Like a Superhero was a very comforting idea to sustain.

And so for me… even after so many, many decades… I still find this idea refreshing ...and even useful in not letting me dissolve into my couch as a Very Old Man. If you look at the attached images… You’ll see me wearing some of my favorite Superhero Under Armor Compression Shirts when I was around 65 Years Old that have never ceased to draw smiles and public admiration for what these Symbols really mean to people. These two videos are worth looking at for an understanding of these same aspects of “What Happens When Real People must act exactly like Superheros under the most Dangerous of Events: Life and Death Moments that can go either way?”: 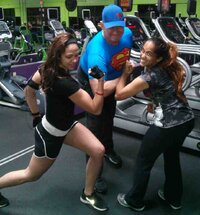 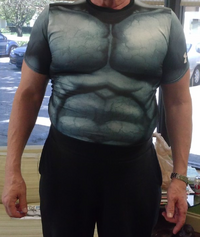 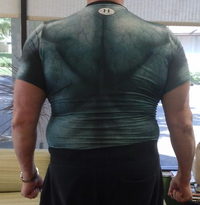 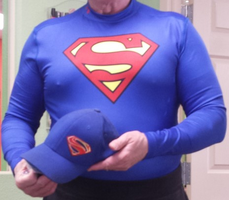 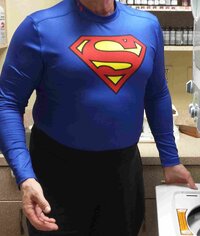