Here are some pictures of the oil filter after I changed the oil with 5 quarts of 5w30 synthetic and 2 quarts of MMO. I am surprised at how black the oil was and how much crap was in the filter. I still have the filter if anyone wants more pictures.

If you look at just one of the Symmetrical, Rectangular Shaped "Carbon Wafer" nested inside of the Fan-Folds high-lighted in Red & Yellow in this Blow Up of one of your images attached below: 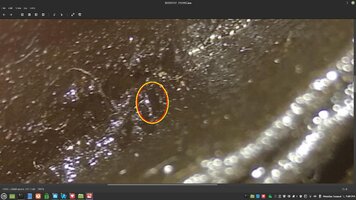 ...You can see how this stuff literally 'cleaves off' of built-up surfaces... in particular, along the undersides of the Crankshaft Cradle Bracing Bars that has all of those Flat (Down Facing) Surfaces where draining Motor Oil clings, gradually "growing" into those Thickening Engine Blow-By 'Carbon Plates' over perhaps 200,000 Plus Miles of Operation: 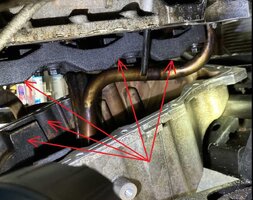 On Average for such High Mileage Vehicles...THIS is the natural result of having Burned around 12,000 Gallons of Mid-Grade Gasoline and having Gas-Gum and Carbon Mung Trapped Compression Rings along with allowing the Engine Oil to being "nursed" along well past 3,000 Miles between Oil Changes.

The Blow-By resulted in the loss of Oil Lubricity from the Motor Oil getting contaminated with Un-Burned Fuel inside of the Boxy-Guts of these Older Engines and the BLACK Color of the Motor Oil is NOT caused by Dirt Contamination ... IT'S JUST BLACK CARBON SOOT.

Once these "Carbon Stalactite Plates" get disturbed or loosened and begin Flaking Off... the Vacuum and Suction caused at the Metal Screen in and around the Oil Pick Up Tube by the Gerotor Oil Pump can get suddenly allow that Inlet to become Occluded with a BOAT LOAD of this Crap. You will never get to see any of THOSE Chunks showing up inside of the Fan-Folds of the Oil Filter Paper because they are Too Large and Too "Gummy" to make it through that "Strainer" Metal Mesh Screen on their way through the Oiling System:
. 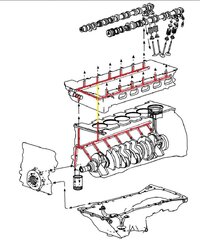 So just to be on the Safe Side... My suggestion would be that in lieu of using Mobil1 and an Expensive Mobil1 or K&N Oil Filter right away, hold off for a while and instead... Use (7) Quarts of Cheap Organic 5W-30 Motor Oil along with some Decent Oil Filters and perform JUST A FEW MORE REGULAR Oil Changes.

Say... every 500-750 Miles or so for at LEAST a few More Oil Change Cycles... at least until you begin to see less and less of this "Black Mung Carbon Coffee Grounds" stuff showing up inside of the resulting Torn Down Oil Filters. It certainly Won't Hurt ...and it could become Cheap Insurance against any Serious Drops in Oil Pressure ...this Late In Life ...For that Marvelous Motor. :>)
Last edited: Tuesday at 11:47 AM
Toggle signature
"Chance Favors The Prepared Mind..." Dr. Louis Pasteur
"De Mortuis GMT-360... Nil Nisi Bonum..." (NEVER Speak Ill... of a Dead GMT-360)
D

Do you think there is a way to spray something through the oil drain plug hole that could possibly loosen the buildup on the pickup screen and rinse it out? I used Rotella T6 and a Fram oil filter. I could do another oil change in a couple weeks and I'll open that filter as well to see what I find.

This is a Controversial Topic... and perhaps this is so because So Few of US have ever completely Torn Down Any Used GM LL8 Motors and actually completely cleaned this Crap off of EVERY Single Engine Surface... right down to Bare, Shiny Metal .

What also compounds this 'General Lack of Hands-On Experience' is NOT knowing which Chemical Cleaners will Work Best Without Destroying the Motor. I have worked though ALL of these issues, but before advising you to "Go Ahead and DO THIS.. .And THEN Go Ahead and DO THAT..."

Please ...Consider ALL of this Information Very Carefully:

(1) You should be Realistic with estimating just How Much Longer you intend to Drive this SUV. If you take any Drastic Actions with attempts at performing "Internal Cleaning" and the Motor suffers paradoxical problems as a result, You Could Make Present Matters Even WORSE.

(2) Before taking ANY Actions whatsoever....YOU SHOULD INSTALL AN ANALOG OIL PRESSURE GAUGE AS DESCRIBED IN YOUR OTHER THREAD AND TAKE A BATTERY OF MEASUREMENTS FOR OIL PRESSURE OVER A WIDE RANGE OF OPERATING CONDITIONS.

(3) As I mentioned to you over in your other Parallel Thread on this Same Topic... Nominal Oil Pressures for this GM 4.2L LL8 Engine are from 12 PSI at 600 RPM near Idle...and around 65 PSI at 3,000 RPM when the Gerotor Oil Pump can move over 11 Gallons of Oil Per Minute through this Motor.

(4) If the Oil Pressure(s) remain Nominal under these operating parameters and conditions...Then DO NOTHING in the way of taking extravagant measures to 'Clean Up the Bottom End' of all this Black Mung Junk.

(5) If your Oil Pressure drops precipitously low and does so RANDOMLY... More than Likely...One of Two things (or BOTH) are happening:

(A) The Oil Pick Up Tube has Clogged Up and has gotten so covered over with Black Mung Crap that the Gerotor Oil Pump is suffering from Oil Starvation. Oil Pressure? Nope... Then it becomes... Non-Existent!

(B) Oil Starvation CAN create such a substantial Suction and Vacuum upon that Old, Tired, Flattened Out "Blue" Viton "O" Ring in between the Oil Pick Up Tube and the Base Inlet of the Gerotor Oil Pump... that it TOO Can Completely FAIL and become 'Open To Atmosphere' down inside of the Crank-Case. No Suction? NO OIL PRESSURE!

If either One or Both of THESE conditions have prevailed... then Removal of the Crank-Case - Oil Pan and probably removing the Front Timing Cover as well will become necessary too, as the Timing Chain Set is almost certainly in need of replacement on any such High Mileage Motor.

THIS WORK IS NEVER TRIVIAL TO DO!

(6) During any "Engine Tear Down"...Soaking the removed Oil Pick Up Tube in Berryman's Chem-Dip for up to Three Hours would completely clean all of this junk out of the Piping and Off of the Screen Pick Up areas. And replacing the "Blue" Viton "O" Ring will solve the problem of No Suction in between the Gerotor Oil Pump Lower Manifold and the OPT Mounting Flange.

(7) If your Motor is of a Later Vintage, then using the 2nd Generation "Orange" Silicone Rubber-impregnated Flange Gasket would need to be replaced instead of the "Blue" "O" Ring Style Seal. You must NOT Mix-N-Match these two Sealing Methods in between the Early and late Model Engine Front Timing Cover-Gerotor Oil Pump Combos... EVER.

What I would do is at every oil change replace one of the quarts of oil with ATF. It's detergents will.slowly dissolve the gunk while not getting chunks loose to clog up the works.

Eric the Car Guy swore off flushes after blowing up an engine after doing one. I'd just do the ATF trick.
Toggle signature
Need GMT360/370 Service Manuals? Get them Here!
Need Full Size Truck Service Manuals? Get them Here!
FAQ Threads
'02 TB EXT 4.2L '06 Saab 9-7x 5.3L '07 TB LS 4.2L '11 Caprice PPV 6.0L '08 Avalanche LTZ 6.0L 2021 Sierra Elevation 3.0L Duramax
This site is funded by you! If you have saved some money from help you received, please consider becoming a supporter or donating. All proceeds go to supporting the site. Thank you!

How do you expect a sheepdog to protect the sheep if the farmer and the sheep keep kicking it - me
You must log in or register to reply here.