Hi Everyone,
I wanted to know if anyone has any experience with the Cooper Evolution H/T?
My father has graciously gifted me 4 of them for Christmas, and I wanted to know If they are as good as the guy at tireman says they are. Out the door with my dads payment Ill be out of pocket 50 bucks for all of them cuz tax.

I have the older discoverer HT on the back of a 67 firebird and I have no complaints how they react. It's a middle of the road priced tire that performs more like a higher dollar HT. I would think the evolution performs similar. It's what replaced it iirc.

Just a quick look on the evolution they seem to be rated fairly well, comparable to BFG advantage TAs and such. If they perform like those I'd be very happy, those BFGs ride very nice under all conditions and are quiet.
Toggle signature
"By perseverance, study, and eternal desire, any man can become great." - GENERAL GEORGE S. PATTON
"You write your own book, and what does the next page say?"-Myself
Oh no.... I've.... caught.... the.... mod.... bug....

I had Cooper Evolution H/T’s on my Envoy, which were getting worn down pretty much. I just replaced them with Cooper DISCOVERER HTP II’s; which seem to be working great. We’ve had a bunch of snow out in the SEATTLE area in the last week and I’ve had no problems getting around, and then going over the passes back home to Yakima.

When I was looking for new tires, it seems like Cooper changed their tires a lot in the last few years. When I put the Evolutions on the Envoy four years ago, I was just replacing what was on the Envoy, with the same tire. This time the same tire wasn’t available.

Cooper was bought out by Goodyear 6 months or so ago . They had been outsourced to China since the Dunlop plant in Huntsville, Ala was bought by Goodyear quite a few years ago. Goodyear also imports almost all their tires tires now also. They claim they have plants in 23 countries. As far as I know the only thing made in U.S. the Wrangler/Kevlar series.
So just like everything else you buy these days the name on them means nothing. Who knows what kind of quality your getting and if you buy another set next year they'll probably be completely different from the set you got this year.
Toggle signature
-03 V-8 Envoy Never understand throwing 6-7 parts at a problem THEN asking for a diagnosis. Does it really cost that much to get a problem looked at these days? Chances are you will run out of money before you run out of guesses.....
Reactions: UsernameIsTaken, xavierny25 and Mooseman
N

I've had 2 sets of Coopers on my TB, they are excellent, and planned on continuing with them. Now I find out they're made in China. Sheech.

Just because they're made in China doesn't automatically make them junk however does affect the decision according to creating jobs at home. Unfortunately we're also driven by cost, both by the manufacturer and the buyer.

And I just checked my new Cooper Discoverer AT3's on my Sierra and they're made in USA. Love these tires since I don't have to buy a separate set of winters with these. They've been very good so far.
Toggle signature
Need GMT360/370 Service Manuals? Get them Here!
Need Full Size Truck Service Manuals? Get them Here!
FAQ Threads
'02 TB EXT 4.2L '06 Saab 9-7x 5.3L '07 TB LS 4.2L '11 Caprice PPV 6.0L '08 Avalanche LTZ 6.0L 2021 Sierra Elevation 3.0L Duramax
This site is funded by you! If you have saved some money from help you received, please consider becoming a supporter or donating. All proceeds go to supporting the site. Thank you!

I would imagine if these are going to be made in China, the cost won’t be going down. It will be interesting to see what happens.
OP
T

So, I ended up bailing on the Coopers because my local Tireman would not have them in the size 245-65 r17 for a few weeks. I did not want to get ling longs they had in stock well because they looked sketchy and I wanted to stick with a brand that has some reputation.
I don't know if it is just the world we live in, but I went around Toledo and the Goodyear tire center, Tireman, Bell Tire, and Midas had very little inventory and what they had was the wrong size or weeks out if they could even get them.
So the other day I went to Costco with my mom to help her grocery shop for new year's finger food and on the way out I stopped by the tire center. I spoke with the general manager of the tire center and she pulled out a Ipad and showed me that they had Michelin defenders and Costco Exclusive MICHELIN X LT A/S 245/65R17 107T BSW ALL SEASON in stock on the shelf.
From what I understood the XLT is the defender slapped with a different name to give it that Costco exclusiveness. However as she showed me it has the same Michelin part number.
I looked at the tires on the shelf in the back and also discussed the BFGoodrich tires she also had in stock for that size for a bit cheaper however there was no $150 off a set of four with those.

I ended up purchasing a set of the Michelin XLT tires for $778 out the door with tax, discounts and install fees and all that included. I think I got a good deal, since Tireman quoted me 970 for a set of Michelin defenders. From what I read here and online I guess Michelin is the whos who of tires?
I get them installed tomorrow, If you guys want, I can upload pics and whatnot of the tires.

Thank you thou for the recommendations; I would have gone with the coopers if they had them in stock.

Sounds like a good deal to me!
Toggle signature
"Never put passion before principle. Even if win... you lose." Mr. Miyagi

Allegedly the Costco Michelin is slightly different. Usually the tread pattern. Some are indeed the same too. I have defender LTXs on the colorado and moms tahoe. I had one replaced after the accident and the tread is almost identical in depth compared to the others that have almost 30k on them. They're a great tire. Once you start getting into higher load ranges then it doesn't matter as much brand to brand because all tread warranty drops.

On the tahoe they're leaps and bounds better than the continentals they replaced. But they ain't cheap.
Toggle signature
"By perseverance, study, and eternal desire, any man can become great." - GENERAL GEORGE S. PATTON
"You write your own book, and what does the next page say?"-Myself
Oh no.... I've.... caught.... the.... mod.... bug....

So, I have them installed. They look very fresh. I always hated the white lettering on the old tires.

I drove 100 miles today to try them out. On the highway its night and day difference from my old ones. No more weird 70mph wobble.

Here are some pics. Im happy that these are made here instead of the far east. Somone has to buy North american. Lol. 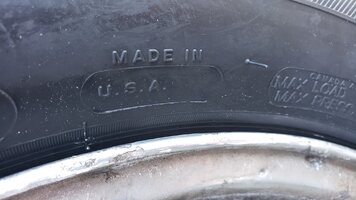 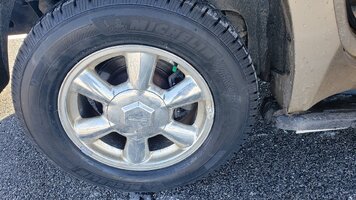 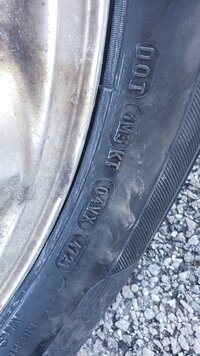 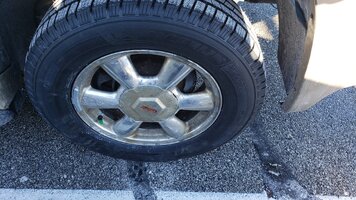 Toggle signature
2004 Gmc Envoy Xl 211K miles
Reactions: xavierny25 and Mooseman
You must log in or register to reply here.