Well I am pricing out some end links for my 2006 4.2 LT. What brands are people liking? I have an order through Rockauto in the works so that narrows it a bit.

ACDelco professional is the more pricey option. I had good luck with Moog...….back in 2012 I installed their greasable outer tie rod ends and after 100,000km they are still solid as can be but I suspect their quality may have diminished.

Also ordering sway bar bushings. I have the blue ACDelco fronts (cheaper than the Moog) and the blue Moog rears as others on this forum found they were the same manufacturer.

thanks for any input.
Ubique

It was recommended to me that Moog was the way to go, and I put them on my rear sway bar on my '07 5.3 LT. I've heard some rumors about their quality, too, but mostly the quality control. I just made sure that everything was threaded and the boots weren't pre-ripped or anything goofy like that.
OP
OP
B

Just a basic write up, should have taken some more pictures... Was a great day, finally warm, -7C, little wind and sunny. Total time was around the 3.5 hour mark, set up to cleanup. I lost maybe 30 minutes wandering around looking for specific tools. Now I had been getting a clunk from the rear for some time but the end links appeared firm but one had the boot compromised. I figured this is the cause of the clunk. Do one, do them all and do the bushings as well. They are inexpensive and you are already moving the sway bar around.

I jacked the rear up and had jack stands under the frame, which allowed the rear axle to droop, hopefully giving me some more room to work. Now I had sprayed the nuts down with penetrant several times over the last month, hoping I cut unbolt them and not have to cut them. In reality, cutting made it so much easier and faster.

I sectioned each end link in half with a sawzall, which allowed the sway bar to drop out of the way, giving greater access to the top bolt that is mounted to the frame. Using a small angle grinder I cut and then ground down the top nut. Once there was no tension on the sway bar, it was obvious that the link with the compromised boot had play in it. The other side was loose but no play.

The bottom bolt proved to be much, much easier than anticipated. I removed the boot and was able to hold the back of the threaded section with vice gripes and zip the nut off with an impact. In hind sight, I should have done this first but I was running on the theory that I was going to have to cut/grind it all off.

I used ACDelco Professional end links, which were greasable. I threaded in the zerks and pumped them up with some Amsoil purple #2 lithium and worked them around. The new links bolt up easy enough as you can use a 17mm wrench on a hex head behind the threaded section. Its precarious because its hard to get proper leverage to torque the bolt or get enough throw to run the ratchet swing.

I also installed new Moog blue sway bar bushings as recommended. The old black rubber ones were just plain worn out. They offered little resistance in removal, whereas Moog ones required some muscle. I used a small smear of silicone grease under them. Some say yes, some say don't but adding a level of protection against rust is aces in my book. There was a small amount of corrosion in that area.

Next up is the fronts, which should get done this week..... maybe.. Weather is supposed to be at or near 0C but working day shifts does not give me the best part of the day. 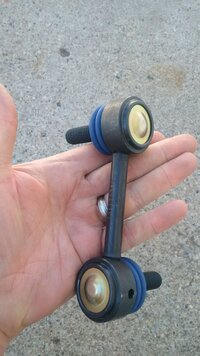 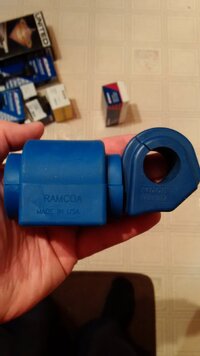 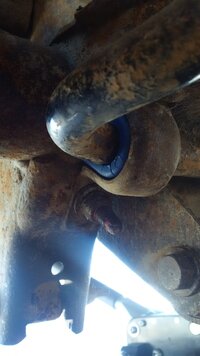 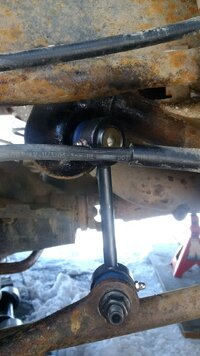 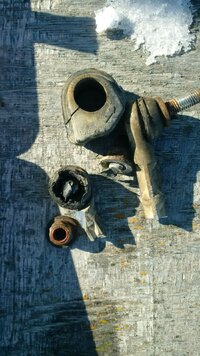 Moderator
Only we can say that -7c is warm

. Good job.
Need GMT360/370 Service Manuals? Get them Here!
Need Full Size Truck Service Manuals? Get them Here!
FAQ Threads
'02 TB EXT 4.2L '06 Saab 9-7x 5.3L '07 TB LS 4.2L '11 Caprice PPV 6.0L
This site is funded by you! If you have saved some money from help you received, please consider becoming a supporter or donating. All proceeds go to supporting the site. Thank you!
How do you expect a sheepdog to protect the sheep if the farmer and the sheep keep kicking it - me
OP
OP
B

Oh sweet baby Jesus was it nice out! You could hear the sleds going, snow melting and very little swear words coming out of me.

And you guys were right about cutting. It saved so much time and hassle. I just hit the top bracket with some black rust paint after grinding. They just don't give you much room under there.
Ubique
OP
OP
B

As I did the e brake today, I noticed the wonderful corrosion resistant finish on the rear end links. Other than a rip down the lane, these have no miles on them. 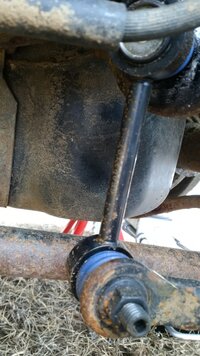