Making A "Mad Dash" to Get a Replacement Top Dash Cover

Lifetime VIP Supporter
Arguably... The only thing wrong that I have found since making the purchase of my Indigo Blue 2000 Chevrolet Silverado... has been the realization that the Upper Dash Board had a very deep sag in the middle running the length of the dash panel. And after taking a peek underneath the fairly nice, Charcoal colored "carpet" cover... I found that the critical evidence of the large fractured out pieces of the OEM dash laying underneath. I put this off for a while until I finally had the occasion yesterday to actually NEED to drive the "Toy" I got with only 76,600 + miles on it... having added very few since... and heard the unmistakable and very irritating "Dash Rattle" that is part and parcel to the damage done to it by being exposed to Florida Sunshine.

I scouted "The Internets" for a suitable $150-ish vinyl skin cover to work its magic of cover and concealment... but there are none available for the full size trucks that feature the Dash Handle on the passenger facing side of the cab. I bounced to eBay and could only locate very skimpy results that were waaaay too much money to throw at any cosmetic problem... and lucked out in locating THIS one for $275.00 with Free S&H. They have only one more of these available... so if you have a similar need... this might be the best OEM solution available... but don't wait too long... or just like this one... yours will be long gone: 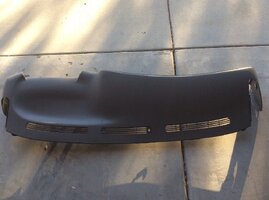 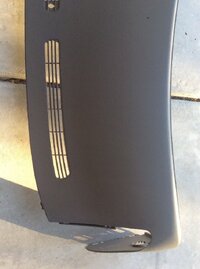 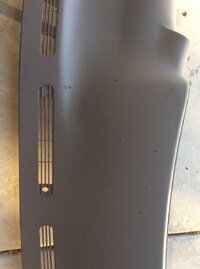 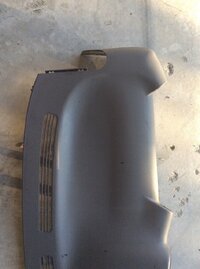 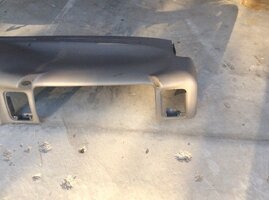 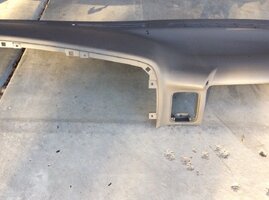 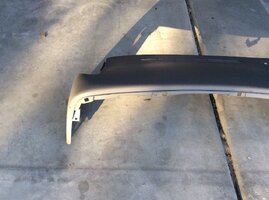 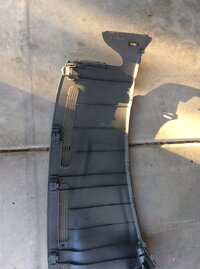 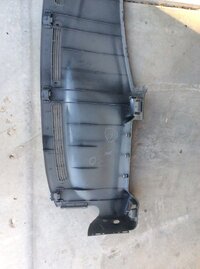 Lifetime VIP Supporter
Just an update on this opportunity... there IS a another of these Dash Panels available that is even more complete... with the Handle and Air Vent Boxes included on eBay ...and for less money as well if you are in the need for this item. The attached Youtube video is The Best Instructional to be found that; in a very straightforward manner, tells how the job gets done with little fanfare:

Lifetime VIP Supporter
If you want... You can skip the Dialogue and head straight for "The Jam...In the Jelly Roll..." at this Link:

Okay… What started out with hopeful expectations almost two months ago … ended in a problem caused by the eBay Vendor-Seller sending me the Message that after my concern that the Item had not arrived after 21 Days… she was explaining that she "supposedly" had shipped the Silverado Dashboard “… to a Local Greyhound Bus Station... for you to pick up...” I was like... What? WTF did she just Type? So being the gentile and patient soul that I strive to be when dealing with Stupid People… I gave her the benefit of the doubt and waited patiently for her to Un-PH*** I mean "Undo" her problem ...for 41 Days ...before I could manage to convince her to refund my money.

I suspect that since I’d made this purchase somewhat Incognito as a “Guest” to avoid any issues of PayPal getting in the way… that perhaps she thought she could take the money and then bend the rules a bit. What she did NOT know was that I have a decade of experience and a long-standing account with eBay that I’ve always maintained at a 100% Sterling 5* Rating… So when I next continued to correspond with her… suddenly my Membership Status apparently put an entirely new complexion on the matter. She re-paid the full amount ... post haste ...and the issue is now settled.

However, since my Strength always Increases the more any situation challenges me… I rose to this occasion by renewing my Hunt for another 2000 Chevrolet Silverado 1500 Dash-Top Panel that was at LEAST as good if not better than the one that had just slipped through my fingers. And… I HIT THE GM JACKPOT! Again… eBay had one of these Rare Panels of the exact same color as my remaining interior plastics… and it was COMPLETE besides… with all of the OEM Forward Windshield side Dash Locking Cleats intact… and with the Passenger Handle and an extra Vent Box as well as an Extra Screw In Automatic Headlight Dimmer Sensor. This neat package arrived in only four days… with no Muss...No Fuss ...and NO DAMAGE… Oh...and no need for me to have to go to any “Local Greyhound Bus Station “ and produce enough credentials to retrieve the damned thing!

After waiting for the seemingly unending series of Thunder Storms peppering our location so often lately that the salinity of the Gulf of Mexico has dropped so low as to cause a Gigantic Red Tide Bloom… making anybody owning Gulf Side Property or Boats… absolutely miserable right now as the Dead Fish begin to pile up and rot all along the edges of the beaches and land near to that water. But in my case… with the Sun keeping things dry, I moved my Silverado out under our Giant Pin-Oak so as to be able to swing both doors wide open and get to work in the Shade on this long overdue Project.

And so… I also decided to use my New Canon Power Shot ELPH 360HS and while copping around (55) Images of the Step by Steps… it was a Big Surprise that I had accidentally also recorded this work on a Video that includes all of the Still Shots in proper Sequence. What is cool about this is that the Video apparently starts as soon as you slightly depress the Large Shutter Button...and at the points where the images are”SNAPPED”… the form a Cool Still shot of what the central component or action was in the Step By Step… Now I ask you... How Cool is THAT? That feature will be a real help in memorializing various procedures in a manner that flows like a Check List of “Do This… Then This…,” and so forth. So considering that I want to Memorialize the Re-Build of the GM 4.2L LL8 Engine is this manner… NOT have to plan and edit and do any other Video Post Processing..blah blah blah… is a God Send!

See the Video and all the Stills for yourselves at this Link:

The only problem I had was that I had to massage the .MP4 HD Video into an .M4V Vimeo 60 flavor ...fairly painlessly... using Linux Mint 19 (Tara) and the Video File Conversion Linux APP called “HandBrake”. Sweet… Oh...and the last irritation here is that Flickr.com limits the Play Time of all videos to 3:00 Minutes and the file size must be under One Megabyte per image or video. So If you want to see the entire Video... you'll have to Download it and play it with VLC (VideoLan) . In the mean time ... I’ll also keep using the "Converseen" Linux APP to bulk load and compress all of my HD Images to solve the still shot side of the problem. In the end… it took all of about One Hour… and an additional 30 Minutes to deal with my forgetting to remove all of the Metal OEM Forward Windshield side Dash Locking Cleats that were stuck inside of the Body Slip-In Tangs around the perimeter of the Windshield… and to TAKE MY TIME AND NOT FUBAR THE NEW DASH PANEL BY BEING TOO AGGRESSIVE WHEN PUSHING THOSE NEW TABS UNDER THE NEW DASH PANEL INTO PLACE.