Got tired of every time I left my dash cam plugged in, then if I didn't drive for a couple days - I'd find a nice dead battery (usually over winter). Needless to say, this became something on the 'must do' list! Umm.. the list I made 2 years ago.

Sorry, no pics - it just seemed too easy.
Decided to find the easiest route that would cause the least modifying (which means it can also be reversed easily too if something went wrong!).
Took out the "Cig" fuse.
Ripped apart another fuse, to use its legs.
Soldered 2 long'ish wires onto the legs.
Found a switched power circuit also in the fuse box. Used one of those fuse-tap things to pull a line out.
Attached a ground wire to... well... a ground! Ha ha
Grabbed a relay, and an inline fuse from one of my bins.
Routed a wire from one "former-cig-fuse" leg to the relay pin 87.
Other "former-cig-fuse" leg wire soldered to the inline fuse holder.
Other side of the fuse holder goes to relay pin 30.
Ground wire goes to relay pin 86.
Newly tapped switch power wire goes to the final pin 85. 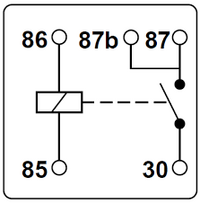 That's it! Now, when you flip on the key, the switched circuit turns on the relay which essentially "puts the fuse back in".
If things go south and a wire breaks, relay fails, etc - just pull the former-fuse leads out and stick your original fuse back in (that you left taped under the cover, right???).

Moderator
Which circuit did you use to activate your relay? I used the TCCM fuse because it was the only one I could find that would work with the tap-a-fuse I was using (others had other fuses or stuff in the way). I didn't use a relay though. The supply from the tap-a-fuse I put in a 20A fuse and put it to the "out" side of the cig fuse. This is the tap I used:

Just be aware that the OBD port is also powered by the cig fuse.
Need GMT360/370 Service Manuals? Get them Here!
Need Full Size Truck Service Manuals? Get them Here!
FAQ Threads
'02 TB EXT 4.2L '06 Saab 9-7x 5.3L '07 TB LS 4.2L '11 Caprice PPV 6.0L
This site is funded by you! If you have saved some money from help you received, please consider becoming a supporter or donating. All proceeds go to supporting the site. Thank you!
How do you expect a sheepdog to protect the sheep if the farmer and the sheep keep kicking it - me
OP
OP

Actually, the OBD port getting cut off works out for me - I have one of those programmers/displays that hangs on the window. It's not a lot, but it is yet another draw that kills the battery.
R