How to Replace Tail Light Lens Assemblies on Silverados

Lifetime VIP Supporter
Last Year… after noticing that my Right Rear Tail Light Assembly had a REALLY Dull looking sheen to its overall appearance (...sort of like the Hue of a Two Day Old Black Eye) I decided to pick up a Matched Pair of FULL Tail Light Assemblies and perform an R&R on these two units. I’m just now getting around to swapping out the Old Lens Assemblies today for some Brand New Ones. This Attached Video shows exactly how all of this work gets done on an Identical 2000 Chevrolet Silverado:

Note:
These individual 'Eagle Eye Lamp Assemblies' Do NOT come with the Lamp Bulbs, the Sockets nor the Wiring Harnesses and Christmas Tree fasteners as clearly shown during the Video R&R:


And so… Without further ado... Nothing could be more worthwhile than looking at what the VOP (Video Original Poster) shows during his Procedural Step-By-Steps versus anything additional or 'Wordy" that I might add about “How This Job Gets Done”. I’ve attached some images of the Old Lens vs. New Lens Assemblies appearances that also includes the Box Carton Ends with the Part Numbers and Other ID Information that came on the Packaging when I purchased them both on Amazon for this Repair last year: 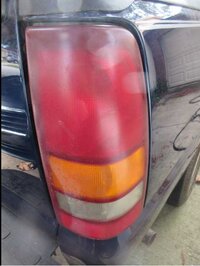 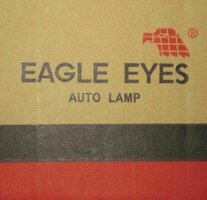 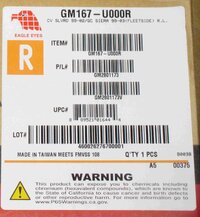 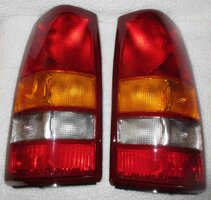 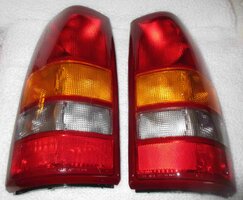 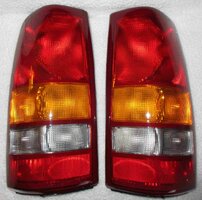 Moderator
Like headlights, I wonder if it's possible to polish taillights?
Need GMT360/370 Service Manuals? Get them Here!
Need Full Size Truck Service Manuals? Get them Here!
FAQ Threads
'02 TB EXT 4.2L '06 Saab 9-7x 5.3L '07 TB LS 4.2L '11 Caprice PPV 6.0L '08 Avalanche LTZ 6.0L
This site is funded by you! If you have saved some money from help you received, please consider becoming a supporter or donating. All proceeds go to supporting the site. Thank you!

As long as the plastic is dyed and not just coated I wouldn't see why not.
I Don't Care About The Money Because My Name Is Made Of Steel. - Upchurch

Moderator
I would think that as they look the same as faded headlights. Probably the same type of plastic but with colour in it. I think I've seen someone polish a CHMSL.
Need GMT360/370 Service Manuals? Get them Here!
Need Full Size Truck Service Manuals? Get them Here!
FAQ Threads
'02 TB EXT 4.2L '06 Saab 9-7x 5.3L '07 TB LS 4.2L '11 Caprice PPV 6.0L '08 Avalanche LTZ 6.0L
This site is funded by you! If you have saved some money from help you received, please consider becoming a supporter or donating. All proceeds go to supporting the site. Thank you!

Lifetime VIP Supporter
For the amount of the Price Point on these being $75.00 Per Side, I agree with you both that performing whatever polishing that can be done to revitalize them would more than be worth that effort. But In this case... the differences in their 20 Year Old, Sun and Heat Embrittled Plastic Coloring was stark, so replacing them as a set seemed to make sense to me. I'm spoiled over the idea that this vehicle has to be classified as my "Vanity Truck" in every sense of the word since I try to keep it pristine. And right now... I only get to drive it around just a few miles every week.

FWIW... My suggestion would be to first measure the distance between the Mount Holes in the Aft-Inner Fender Panel and then Drill Out a section of 2" Angle Iron, slightly shorter than the full length of the Outer Perimeter of the Lens Casements. After removal from the Truck the Lenses can then be screwed down tightly onto the Angle Iron and then mounted into a Bench Vise.

This would allow for some very aggressive action with a Soft Cloth Patch Polishing Wheel and some Fine Clay Bar Rouge while the the Lenses are being held in a more advantageous, Horizontal Position. This 'Off The Truck' Polishing Technique could really speed things up, allowing for a better access to all of the angles and curves on all of the Lens Surfaces and side-step risking any Damage to the Painted Surfaces to the adjacent body mount areas of both Tail Lights.
Last edited: Dec 30, 2019
"Chance Favors The Prepared Mind..." Dr. Louis Pasteur
"De Mortuis GMT-360... Nil Nisi Bonum..." (NEVER Speak Ill... of a Dead GMT-360)

Gold Supporter
You can get a pair here for under $100

Moderator
And right now, polishing also involves a way of protecting them which, for the moment, is not permanent so you have to re-polish them every once in a while. New ones will stay good looking longer.

However, polishing can be a good option for someone on a budget. Nobody has yet developed a secret sauce for protecting plastic from the damaging effects of UV rays permanently on plastic except possibly paint protective film. I have a roll but have yet to try it. Have seen some videos on the subject but would be impractical to use on anything that has bulges like taillights on TB's.
Need GMT360/370 Service Manuals? Get them Here!
Need Full Size Truck Service Manuals? Get them Here!
FAQ Threads
'02 TB EXT 4.2L '06 Saab 9-7x 5.3L '07 TB LS 4.2L '11 Caprice PPV 6.0L '08 Avalanche LTZ 6.0L
This site is funded by you! If you have saved some money from help you received, please consider becoming a supporter or donating. All proceeds go to supporting the site. Thank you!