Get ready for the catastrophic DEF shortage

For those running diesel engines

one more reason for delayed shipments plus adding to the inflation figures.

Get ready for the catastrophic DEF shortage​ 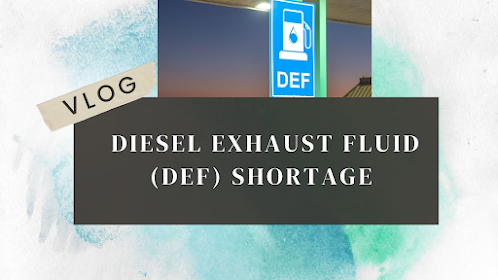 DEF is the acronym for Diesel Exhaust Fluid. Every diesel truck that has been made since 2010 is required to use it. It's a product made of 32.5% urea (made from natural gas) and 37.5% de-ionized water. DEF is kept in a separate tank in the truck and the trucks using it will not start unless the DEF system is working properly. There are regulators inside the engine that mix DEF with the diesel exhaust to reduce diesel emissions. That's the purpose of DEF.

Vehicles with SCR [Selective Catalytic Reduction] technology have a separate tank filled with DEF. This is then injected into the exhaust pipe, in front of the SCR catalyst, downstream of the engine.

Heated in the exhaust, it decomposes into ammonia and CO₂. When the NOx from the engine exhaust reacts inside the catalyst with the ammonia, the harmful NOx molecules in the exhaust are converted to harmless nitrogen and water, which are released from the tail pipe as steam. (link)
Click to expand...

The DEF system is critical for "greening" the use of diesel fuel.


The shortages our country is experiencing are making their way to diesel fuel and Diesel Exhaust Fluid (DEF). If the current shortages of mechanics, trucks, and drivers does not improve then shortages may continue to get worse, so plan ahead. ... The bottom line is that freight won’t move without DEF.
Click to expand...

Urea is manufactured as a derivative of natural gas. The largest US manufacturer is CF Industries, which has an overwhelmingly majority share of total manufacture: 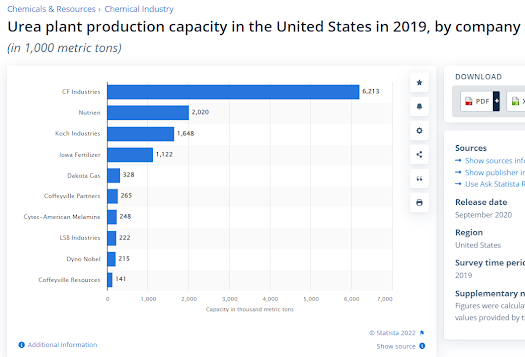 Urea is also an essential ingredient in fertilizer. Yet despite these production numbers, the United States is the world's third-largest importer of urea. Who exports it? Market Realist reports,


There's a global shortage of urea. While the ongoing supply chain issues are also to blame for the urea shortage, the situation got worse after Russia invaded Ukraine. Russia is a major fertilizer exporter and the country has banned fertilizer and urea exports.
China, which is also among the major urea exporters, has put restrictions on exports. Urea prices have surged over the last year, which is leading to high fertilizer prices. To ensure the domestic supply of fertilizers at a time when there are real risks of a global fuel shortage, countries have been looking to curb exports and prioritize domestic consumption. Natural gas is the key raw material in urea production.
Since urea is a key input for DEF, the shortage is having a negative impact on the DEF supply. Also, Europe, which is among the major DEF exporters to the U.S., is battling higher prices and natural gas shortages.
Click to expand...

According to Discover DEF, “If the truck is allowed to run out of DEF, the engine's power is reduced, a solid red warning will be displayed and the vehicle speed will be limited to 5 mph until the DEF tank is refilled.” If the DEF shortage gets worse, it could ground commercial fleets since they mainly run on diesel.
Click to expand...

So: US urea imports are falling, US DEF imports are falling. And US domestic manufacture of DEF is likewise falling and may very quickly turn critical. But what about consumer sales? How will that be affected? Let's connect some dots. Here is dot one, Flying J and the Union Pacific railroad:

Flying J sells 30 percent of ALL the DEF consumed in the United States.
According to Ken Cameron’s excellent article, Flying J gets seventy percent of its DEF via Union Pacific Railroad. Due to distribution points controlled by Union Pacific, Flying J cannot go to another supplier. Union Pacific is in control. In April, Union Pacific told Flying J to reduce its shipments of DEF by 50 percent, or else they would be embargoed, which would effectively bankrupt Flying J.
If this ultimatum is enforced, Union Pacific’s restrictions on Flying J will cause shortages, since this would cut the national supply of DEF by 15 percent. In his testimony, Mr. Konar explained that a single rail car provides 3000 trucks worth of DEF fills (2.7 gal DEF/ per 100 gal of diesel). Every missed rail car will reduce trucking potential by 5 million miles!
Click to expand...

Remember that the trucks will not run if their DEF tanks run dry. DEF is sold through the same pumps at fuel stations as diesel fuel is. If a driver cannot fill both tanks, he can only park the truck. 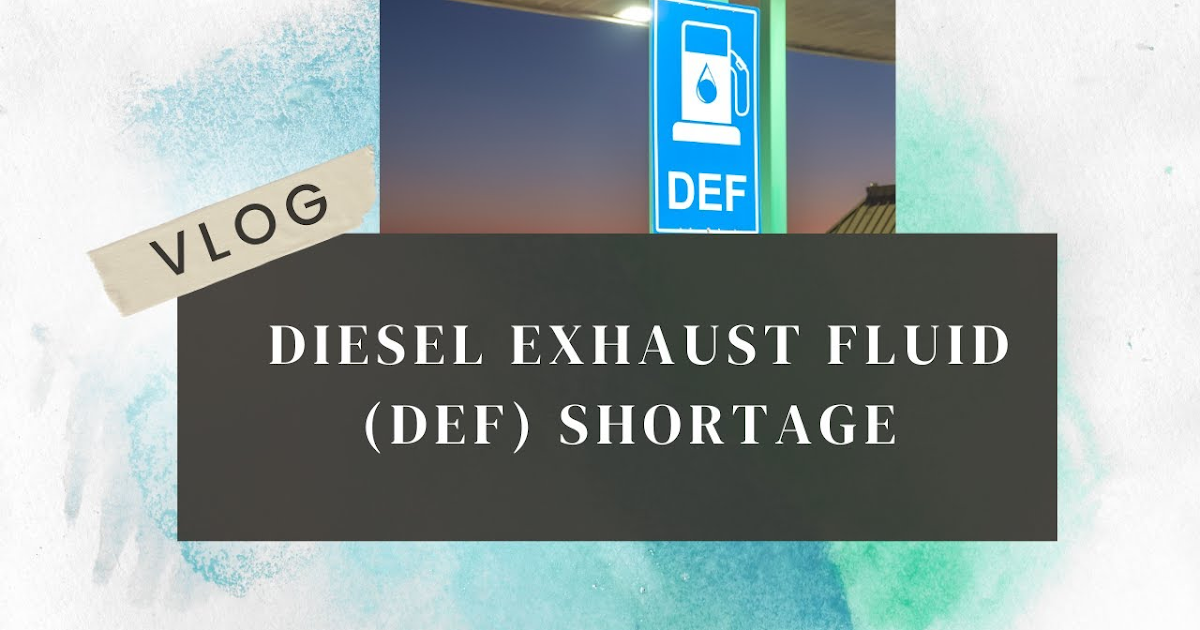 Get ready for the catastrophic DEF shortage

DEF is the acronym for Diesel Exhaust Fluid . Every diesel truck that has been made since 2010 is required to use it. It's a product made o...

Yeah, I run diesel. At least it's not heavy on DEF use. They've been talking about it for a while but haven't seen it yet. Wonder if this will bring back DEF deletes?
Toggle signature
Need GMT360/370 Service Manuals? Get them Here!
Need Full Size Truck Service Manuals? Get them Here!
FAQ Threads
'02 TB EXT 4.2L '06 Saab 9-7x 5.3L '07 TB LS 4.2L '11 Caprice PPV 6.0L '08 Avalanche LTZ 6.0L 2021 Sierra Elevation 3.0L Duramax
This site is funded by you! If you have saved some money from help you received, please consider becoming a supporter or donating. All proceeds go to supporting the site. Thank you!

How do you expect a sheepdog to protect the sheep if the farmer and the sheep keep kicking it - me
Reactions: Redbeard

I think its just another push for the EV world. But that could be politically motivated too.