2008 GMC Envoy. Got a fuel leak just over the transfer case. There are flexible lines that come from the tank and connect to the two steel hard lines in this location. I don’t think it’s the connection. I believe my lines (which start here and extend forward and up to the fuel rail) have rusted through under a rubber grommet that holds them in place in this area.

My question is: once the connections have been released, how hard is it to get the old lines out and the two new lines back in? One would be a feed line, the other I’d assume is a vapor / fuel return line. Any good videos available or advice? I see the replacement hardlines on rock auto. Is there such a thing as a flexible plastic line replacement? I’m thinking it’s going to be a son of a gun to get the old out and feed the new in.
OP

I’ve been looking under the car. I’m going to go for it. I think if I cut out the old ones with bolt cutters then feed the new ones down through from the top that might be the easiest way. I’m going buy the proper plastic fuel & A/C line separator tools too. These have got to be a must! I haven’t had them when I’ve previously done fuel pumps and it’s a pain!

let me know if you guys have any suggestions.

Moderator
The steel lines typically rust and seize up inside the plastic connector and gets destroyed in the process. sometimes not. If that happens, there are repair kits available from Dorman to replace that connector on the plastic fuel line using push-on unions. There are also tool kits with fittings to replace them same as OEM however the cost is a factor there. Find Dorman 800-300 Dorman Fuel Line Repair Kits and get Free Shipping on Orders Over $99 at Summit Racing! Why do you need Dorman fuel line repair kits? Because with these kits, you can repair broken ends, replace sections or entire line assemblies, and create custom supply and return lines a...

These may not be the proper size for the fuel line.

One is the fuel line and the other if the Evap line. There is no fuel return line in 05+.

There is no clip removal tool for these. It's just pry up and pull the line out if it's not rusted in there. If the connector is OK, the clips usually break.

(these may not be the correct ones)

I am pondering the "two lines". To my knowledge an 08 is a returnless system. So what is this second line?

Mooseman said:
One is the fuel line and the other if the Evap line.
Click to expand...

Aha! Answered my question before I even posted it! Damn, you are good!
OP

I got the parts from RockAuto because my parts store said they weren’t available through them. It was a Delphi part. You guys are correct, it’s one fuel line and one evap line that come connected with clips . You don’t separate them for the install.

I did buy the plastic tool that inserts into the connections. Made by Lisle, these worked great for the connections I needed it to work on. (It was the yellow one for this job.). There was one evap connection down on the drivers side of the block that you can’t get the tool into so I just broke the clip out. The new lines come with the female end on this connection..so the clip was new. Same deal with the fuel connection back at the forward position on the tank. (The new line has the female end so it has a new clip.) BTW- you don’t drop the tank for this job.

You DO drop the tank for a new fuel pump and you will need these plastic tools again for that job too.

I opted to NOT cut the metal lines out because I wanted to see how hard they came out and to observe what had to happen in order for the old to come out. Pull them up and out..you’ll give them a little twist at the end. The new one requires the same little twist in reverse to get it started then feeds right down in pretty well. An extra set of hands up top is helpful. I taped up the ends to keep them clean for this process.

So my suggestion is for you to “go for it” if your fuel lines rust out.

This video shows how to use this tool. The only thing I had to remove was the two bolts and two nuts for a control module on the side of the intake plenum. Leave the forward brackets which he pulled off ...in place. 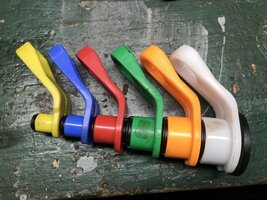 I was meeting the boys to go deer hunting at 3:45 in the morning yesterday when the envoy quit running and coasted to a stop. The fuel feed line had popped off down at the forward end of the tank. Apparently it wasn’t properly seated. I threw a towel on the wet road and slid under. Couldn’t get the line to click onto the other line. Going to put a light coat of grease on the male end this morning and see if I can get things back together. Make sure yours is properly seated.
You must log in or register to reply here.
Share:
Facebook Reddit Pinterest Tumblr WhatsApp Email Share Link