We have a 2003 Chevrolet Suburban that has AWD and the Stabilitrak system and 175k miles.

It developed a shake under power, doesn't happen when it is first started but after 10-15 miles. Felt like a CV joint or U joint.

It has the Borg-Warner AWD Transfer case. Fluid is within 1/8in of full at the fill hole, fluid is clean.

It is currently on jack stands with all four corners in the air. The transfer case is supposed to split power constantly at 40/60 f/r.

When I put it in drive or reverse the rear wheels turn, fronts don't. The front driveshaft isn't turning.

When I switch to 4LO it turns traction control off and operates normally, front and rear wheels turn.

I switched back to AWD, turned the traction control off, the front wheels turned briefly, then stopped.

With the truck off and in neutral I can turn the rear driveshaft by hand and the front does not turn.

The front driveshaft feels a bit like it is binding when turning by hand, it freely as the rear.

I pulled the fuses for ABS and the Stabilitrak systems. Turned the truck on, and got all the corresponding warnings and chimes, but no difference in symptoms.

I switched to 4LO again, and the truck performed as intended. Went back to neutral, changed back to AWD, and into drive, the front wheels were turning, which was an improvement. I could brake and release the brake and they would turn.

The other thing of note is that all four wheels are off the ground. When the rear wheels are turning and the fronts are not, there is no interference or evidence of the traction control working. No chimes, no bells, no sounds of brakes being activated to change the differential in the wheel speed.

Assuming this GMT800 Truck has lived its life being driven around on Salted Roads during 20 Winters and nearly 20 years of activity...

The Wheel Speed Sensor problem usually occurs from "Rust Jacking" happening where the FE2O3 builds up between the Flange of the Speed Sensor and the Outer Body of the Wheel Hub Housing Casting as it Swells and Expands when slowly Decaying into Rust.

This causes the Very Tip of the A/C Signal Generation to STOP WORKING after the adjacent Tiny Teeth of the Wheel Tone Ring passing nearby get moved too far away from that Sensor Tip. Thus, the Wheel Hub Speed Sensor Stops producing any useful A/C Sine Wave Signal.

The solution here is to Remove the Wheel Hub Speed Sensor from the Wheel Hub. Then, after plugging up that hole... Use a Small Hand File or Dremel Tool or a Wire Wheel or some Abrasive Cloth to Clean Up the area around that Rusted Up Hole Right Down to Bare Metal.

Then Clean up and de-grease all of those surfaces with Brake-KLEEN, remove the protective plug from the Wheel Hub and after applying a Dollop of Permatex Purple Brake Lube to the underside of the Plastic Housing of the Speed Sensor, re-install the Speed Sensor Metal Gasket First, followed by inserting the Speed Sensor Tip through that hole and then gently tighten back down the Two Fasteners.

While Briskly Hand-Spinning the installed Tire,You should Pick Up a Reading of at least 450 Milli-Volts AC, proving that the Wheel Speed Sensor is back to working again. Plug the Wheel Speed Sensor back into that Body Harness and ensure that you re-install the Plastic Wire Harness Holding Clamps. Repeat this action on the Opposite Wheel Hub Speed Sensor.

As for the AWD issues... Check out THIS Odd Video to see if your symptoms and problems are similar to the "Rusted In Drive Shaft Issues" these Mechanics somehow managed to deal with:

Thanks for the detail on the rust under the wheel sensor. I will definitely follow the procedure to clean the rust and then measure the voltage on the sensor leads.

AS far as the video, not the same problem. When switching from AWD/4HI to 4Lo and back there is a distinctive click and the shift takes place. I did this multiple times.

The BW t-case I have is supposed to split the power 40/60 continuously, so I am not sure if there is something coded into the t-case module that would change that split and prevent the front shaft from turning.
Reactions: mrrsm

Are you sure of the transfer case in this truck? I've never heard of an AWD truck (TBSS, Rainier, Bravada, Escalade) that has a selectable 4Lo. Can you post a picture of the selector switch and the RPO sticker in your glove box.

Edit: Just saw that this transfer case was available. It is a very oddball unit. The link below gives info on how it works. This may be a stupid question but I was trying to figure out if I have 4WD or AWD. I am pretty sure I have the answer already which I believe is AWD with stabilitrak. The only reason I was confused is that from reading other topics is sounded like only the Denali came with AWD. But I have a norma...

For problems with the Stabilitrak system, you may need a scanner capable of scanning for those codes, like a Snap-On or Tech 2.

When the Stabilitrak light comes one, does the ABS light also come on? If not, this will likely point to the Steering Wheel Position Sensor (SWPS). That is the only component that is not common with the ABS system.
Toggle signature
Need GMT360/370 Service Manuals? Get them Here!
Need Full Size Truck Service Manuals? Get them Here!
FAQ Threads
'02 TB EXT 4.2L '06 Saab 9-7x 5.3L '07 TB LS 4.2L '11 Caprice PPV 6.0L '08 Avalanche LTZ 6.0L 2021 Sierra Elevation 3.0L Duramax
This site is funded by you! If you have saved some money from help you received, please consider becoming a supporter or donating. All proceeds go to supporting the site. Thank you!

I have a three-button selector:
The top button is traction control on/off
The middle button is Regular AWD (I've seen some reference this as 4HI)
The bottom button is 4LO
There is a red indicator light between AWD and 4LO for a t-case neutral indicator.

Just to clarify... Set the DMM to read AC Voltage during the Test of the Wheel Sensor Repair.

Also... THIS attached PDF Document is The BEST Resource for GM-GMC Transfer Case Parts, Exploded Views and Diagrams and Repair and Compatibly Data and Parts Listings:

Sounds like the TC is toast but I may have read that having all 4 wheels in the air and running it is either bad for it or is not a good test because it's not a true 4x4 except in 4Lo, which is working. A better test may be to go on gravel and flooring it to see if the front wheels spin as well.

As far as the ABS/Stabilitrak, either the ABS module is not getting power, not connected properly, having wiring issues or It's failed.
Toggle signature
Need GMT360/370 Service Manuals? Get them Here!
Need Full Size Truck Service Manuals? Get them Here!
FAQ Threads
'02 TB EXT 4.2L '06 Saab 9-7x 5.3L '07 TB LS 4.2L '11 Caprice PPV 6.0L '08 Avalanche LTZ 6.0L 2021 Sierra Elevation 3.0L Duramax
This site is funded by you! If you have saved some money from help you received, please consider becoming a supporter or donating. All proceeds go to supporting the site. Thank you!

MRRSM, Thank you for the PDF!! Yes, the voltage at the sensor side, unplugged, manually spinning the wheel, got it.

Mooseman, that's what I'm not sure about, especially with the traction control, StabiliTrak, etc. Can the system tell it not to send power to the front in this case? I did read about not running the 4 wheels in the air as excessive speed can create an issue. Everything I have done has been at idle, or just slightly above, not exceeding 10mph with no load. But with a 40/60 split, shouldn't the front shaft turn if I turn the rear shaft by hand. Nothing I've read indicates the two operate independently, the shift fork only changes from high range to low range. There seems to be very little info out there on this system.

I need to figure out how to get the harness disconnected from the ABS Module. The plug and clip are different than everything I've looked at. It had one large connector with a lever-type lock that can be pulled back to disconnect the plug from the module, but it feels like there is sand/grit in there and I don't want to break it. All the examples online for this year are two standard type plugs with a locking tab.
D

The diagram in the PDF linked above shows a Fork - Range Shift and a Fork - Mode Shift. The Fork-Range Shift has to be for high range to low range. I haven't seen any mention of different modes? Could that be the reason for the front drive shaft not spinning under certain circumstances?

Here are the OTHER TWO Rare & Important ATSG Diagnostic and Rebuild PDF Booklets that may prove useful in your pursuits. One PDF is an Instructional and Visual Aid when performing the Tear Down and Re-Build Procedures on the 4L60E through 4L80E Transmissions.

The other PDF Manual is for ATSG Certified Automotive Transmission Technicians when using a DMM and other Tool on GM Hydromatic Transmission Electronic Circuit Diagnostics and Component Testing versus a myriad number of Trouble Codes. This latter one may help as a Visual Aid with all of those CXXXX Code investigations, too:

Just as a follow-up - I heard from Rockland Gear who has a good archived write-up on the Borg-Warner 44-82 transfer case and he said to start with the ABS codes that were stored as those can have an effect on the transfer case that I am seeing. So, looks like cleaning up the mounting surface under the wheel speed sensors, checking the tone rings, checking the sensors themselves, and then replacing the EBCTM if needed.
Reactions: christo829, Mooseman and mrrsm

And Just In Case any of our GMT360 Owners-Readers encounter similar problems with the need to R&R the EBCM Electronic Control Unit... THIS Diagram has some helpful views and cautionary information about this task: 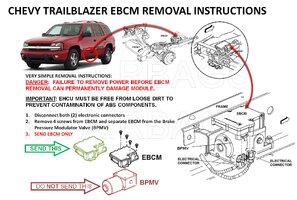